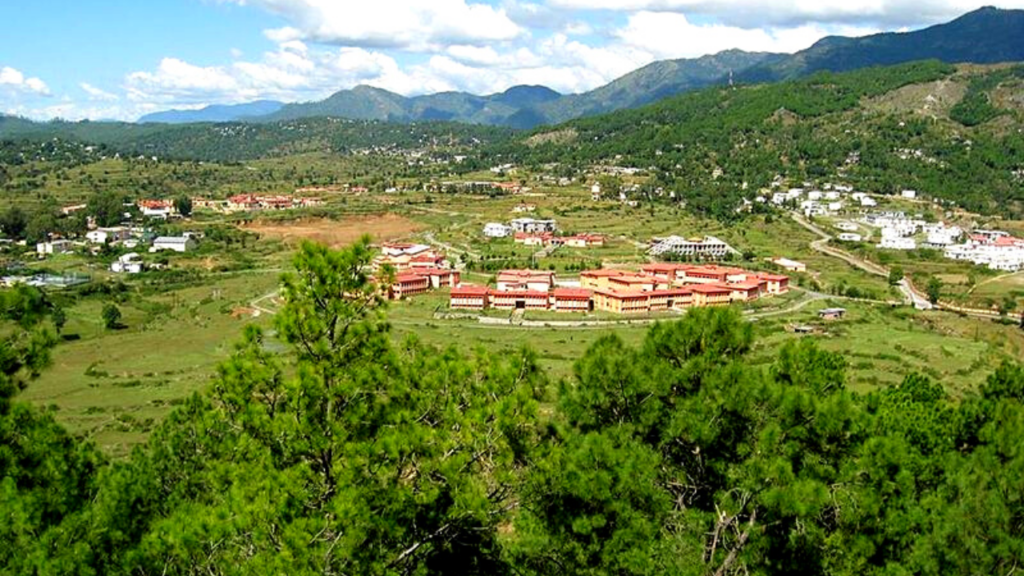 A Complete Travel Guide to Dwarahat

Dwarahat is the ideal combination of nature and beauty that you’ve been looking for in Uttarakhand and our Dwarahat Travel Guide is here to help you plan your Tour. As a small paradise, the place is appropriately named “Way to Heaven” in the local language. If you enjoy the feeling of shining blue skies and flora, as visitors to Dwarahat do, you will appreciate the fact that the area is known for its collection of 55 ancient temples. Dwarahat, located at an elevation of 1510 metres above sea level, is a place where Kumaoni culture and tradition run in the blood of the people who live here.

The pristine temples dedicated to Goddess Durga, such as Maa Dunagiri, are among the attractions that draw visitors to Dwarahat. The temple is about 15 kilometres from Dwarahat, and the best time to visit is during Navaratri when the temple is aglow with devotee offerings. More places to visit while touring the town include Lakhanpur and the Badrinath Temple in Dwarahat. Aside from the temples, the Pandukholi Caves, named after the Pandavas of the Mahabharata, can be visited.

Our Dwarahat travel guide is jam-packed with information on the best places to visit and amazing things to do, making it a must-have for anyone looking for an unforgettable travel experience. 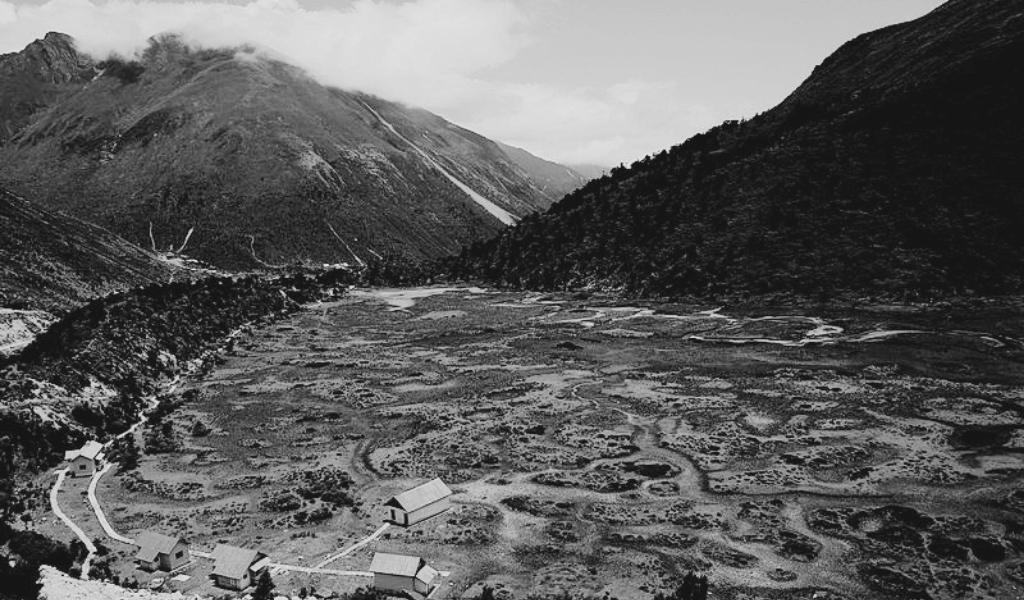 Dwarahat is an ancient town in Uttarakhand’s Almora district, 34 kilometres from Ranikhet and 77 kilometres from Almora. It is well-known for its ancient temples, which were mostly built by Katyuri kings and are now maintained by ASI.

Dwarahat, which means “Way to Heaven,” was once the capital of the Katyuri kings, whose empire stretched from the Sutlez River in the west to the Gandak River in the east, and from the Himalayas to the plains, including the entire state of Rohelkhand. In the sixteenth century, it was ruled by the Chand Rajas of Kumaon.

Dwarahat has 55 ancient temples divided into 8 groups, each with exquisite architectural excellence. Some temples are now extremely valuable archaeologically. They were built in the Indo-Aryan, Maru-Pratihara, or Nagara styles. The temples are mostly made of masonry blocks of Pre-Cambrian granite found in the surrounding area. Instead of mortar, iron clamps and dowels were used to connect adjacent blocks.

The Badrinath Group of Temples consists of three temples, the main one dedicated to Lord Vishnu, who is worshipped as Badrinath. It is built in the Sikhara style and faces east, with garbhagriha, antral, and mandapa. The sanctum contains a black stone image of Vishnu.

The temple bears an inscription with the samvat 1105 date, indicating that it was built in 1048 AD. There are two more miniature shrines in the group; one is dedicated to Goddess Laxmi, and the other is empty. Bandeo Temple stands in the middle of cultivated fields on the banks of Khiru Ganga, a small stream. This pyramidal shrine is the central Himalaya’s earliest developed temple.

Gujar Deo Temple is a masterpiece of temple architecture of the Sekhari Sikhara type. It is a panchratha temple with an orthogonal plan. This temple is the most developed of the Central Himalayan region’s nagara temples. It is dated to the 13th century AD based on architecture and sculptural art. The temple is now in a state of disrepair.

The Kacheri Group of Temples has 12 shrines, with five in two rows and the remaining two on a higher terrace. These temples date from the 11th to 13th centuries AD. These shrines share a portico with a series of freestanding pillars in front with plain shafts and brackets. These temples were built in honour of Lord Siva and Lord Vishnu. In the complex, there is also a circular well made of stone blocks.

This temple complex dates from the 11th to 13th centuries. Mritunjaya Group is one of Dwarahat’s most sacred temple groups. The main temple is dedicated to Lord Shiva, also known as Mritunjaya, and dates from the 11th to the 12th century AD. This Nagara temple features garbhagriha, antarala, and mandapa. In the same complex, there is another temple dedicated to Bhairav, while other shrines are devoid of images and in disrepair.

The Ratan Deo Temple Complex is made up of nine shrines, but only six of them are currently standing. Three temples stand on a common platform, each preceded by a common mandapa facing north, each dedicated to the gods Brahma, Vishnu, and Siva. Among the subsidiary shrines, one faces west and the other two face east and are dedicated to other Hindu deities. These temples are thought to date from the 11th to 13th centuries. 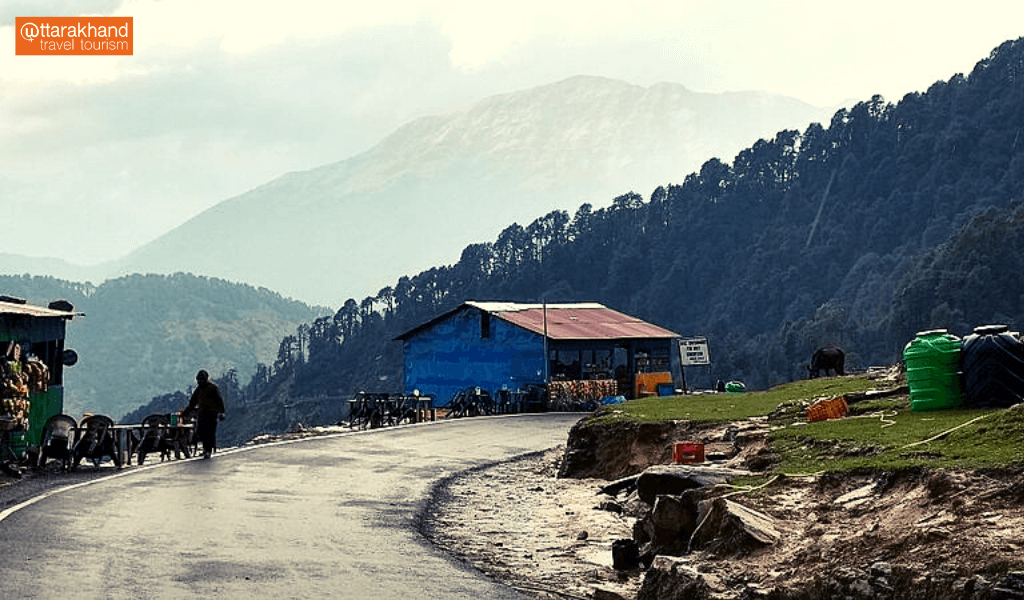 Plan a trip to this town with the help of our Dwarahat Travel Guide,  during the summers and the beginning of winter if you want to experience the relaxed and convivial side of Uttarakhand. The monsoon season can be troublesome because heavy rains cause road blockages and landslides on the way to Dwarahat.

It’s only going to get better to visit the tourist attractions in Dwarahat during the sunny months of March to June, as this is considered the best time to visit, with the maximum temperature reaching only 21? So take some time to relax and enjoy the lovely surroundings of Dwarahat in Uttarakhand.

Heavy rain falls on the entire Dwarahat region from July to September, when the temperature drops to 12? A tour of the town appears to be impossible due to roadblocks and heavy rain, which halts all activities in the town.

Shake off the Monday blues in Dwarahat and prepare for the chilly winters ahead. The town transforms into an actual paradise from December to February, with temperatures as low as 7? making for a heavenly vacation experience.

Places to visit in Dwarahat 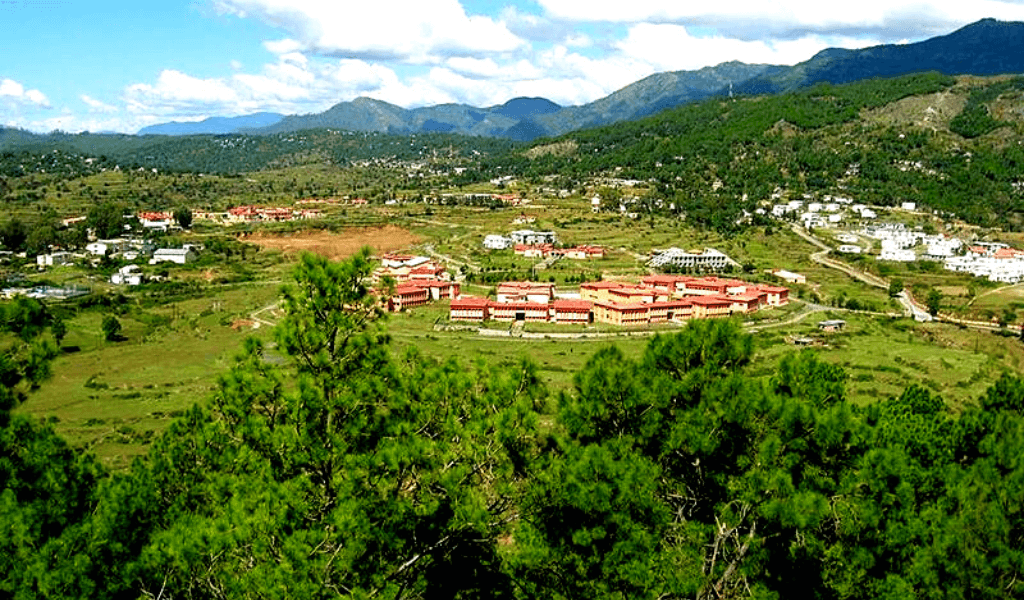 Dwarhat is a heart-warming destination with a variety of ancient temples and a plethora of nearby sightseeing destinations to explore, relax, and rejuvenate with family and friends with the help of our Dwarahat Travel Guide. Ranikhet’s nearby attraction is Dwarahat, a small town known for its archaeological and historical significance.

Dwarahat is known for its ancient temples, including the Shakti Temple at Doonagiri and the Naithna Devi Temple. It is situated in the beautiful Ram Ganga River valley. It is believed that the mythical, valuable, and rare herbs of Sanjivani with high healing and majestic powers grow within the Shakthi temple premises. The Dwarahat valley is beautiful and popular with tourists. Let us explore the top 10 places to visit n Dwarahat: 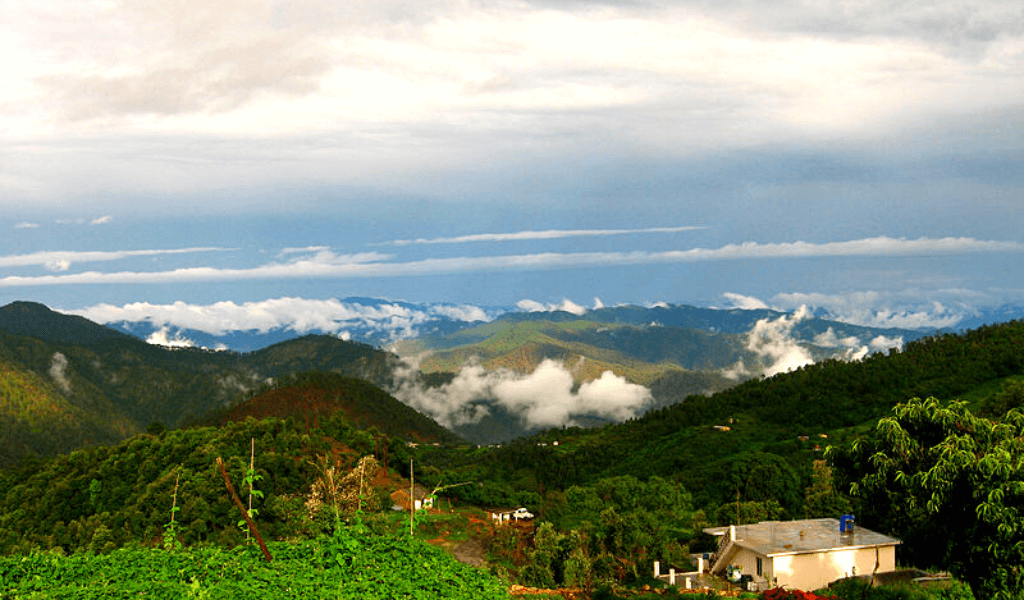 It is 14 kilometres from Dwarahat. Doonagiri’s locales adorn a temple dedicated to Vaishno Devi. Many myths attest to this fact, according to which when Hanuman was carrying the Sanjiwani booty, a piece fell here, and this location has been known as Doonagiri since that time. Doonagiri provides a clear picture of the majestic Himalayan Range. During the Chait and Ashwin months of Navratras, Doonagiri is overrun with tourists and devotees. 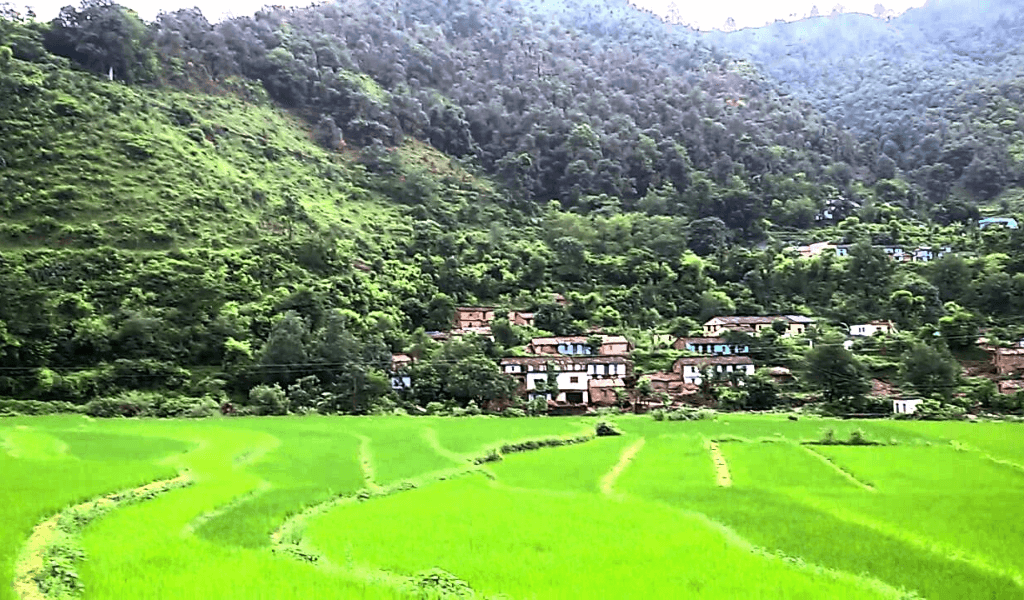 It is located on the Ranikhet-Badrinath highway, 18 kilometres from Dwarahat. Chaukhutia’s historical past is as clear as a gleaming piece of gold. The religious significance can be seen glistening in the nearby areas. Chaukhutia travellers enjoy the Kali temple, Vaishno Devi’s temple, ancient forts and ruins of the Katyuri dynasty. 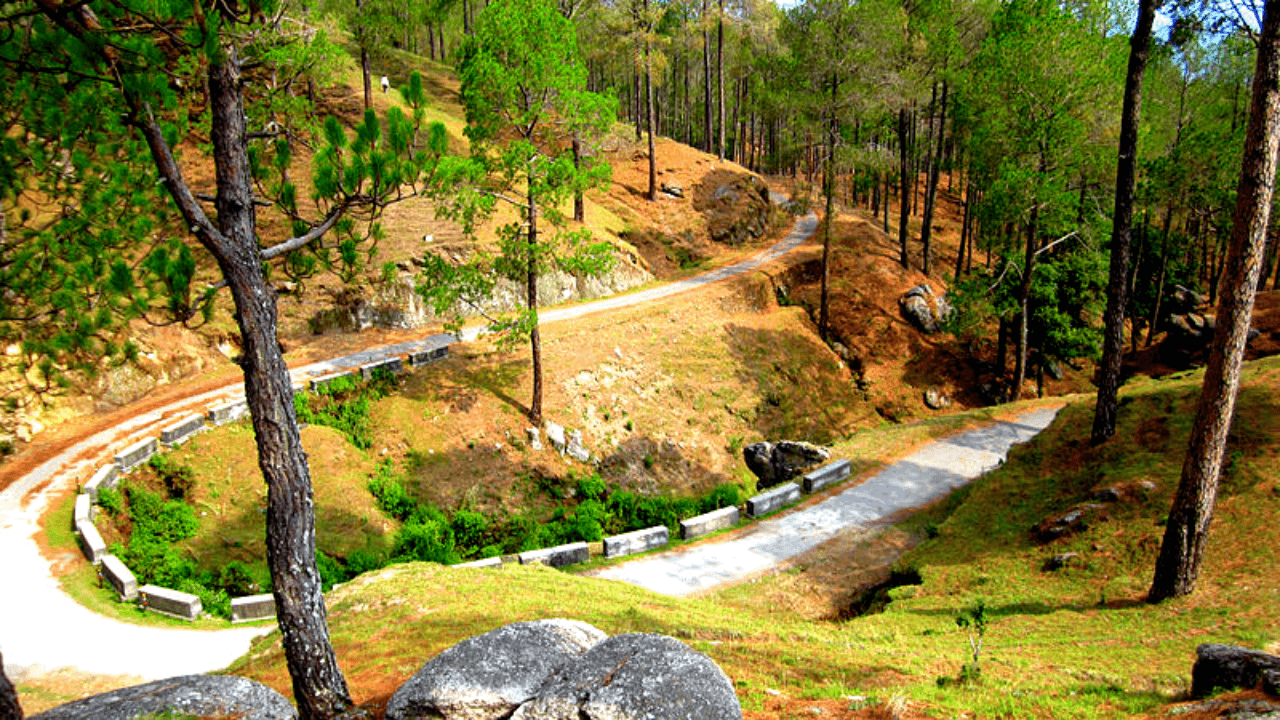 Ranikhet is a hill station in Uttarakhand’s Almora district. Ranikhet is also the home of the Indian Army’s Kumaon and Naga regiments. Ranikhet provides breathtaking views of the Himalayan range’s snow-capped peaks. Ranikhet literally translates to “Queen’s Meadow” or “Queen’s Field.” Ranikhet is 37 kilometres from Dwarahat and sits at an elevation of 1,869 metres above sea level. 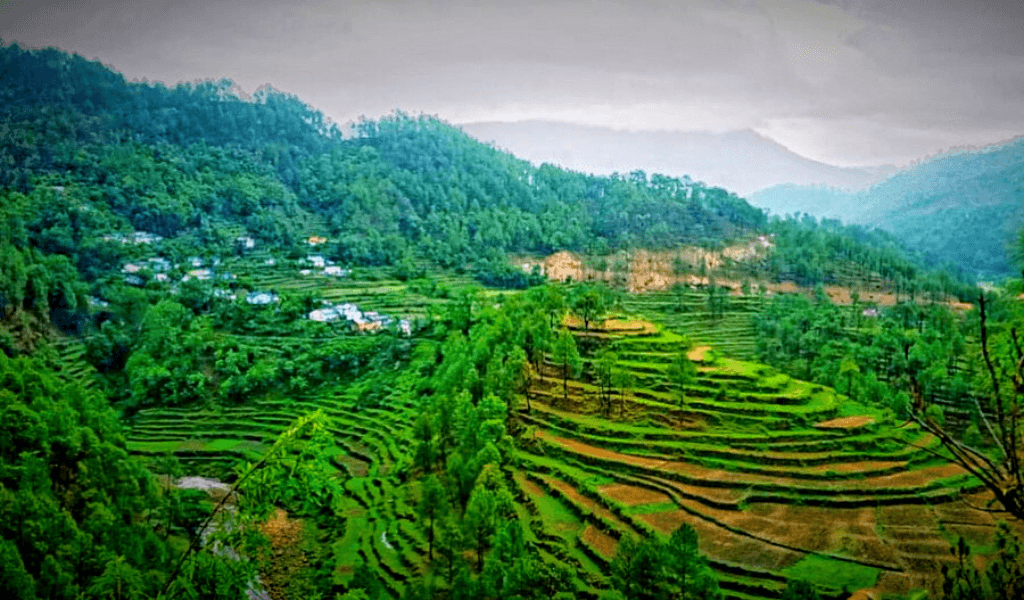 It is a temple dedicated to Lord Shiva. Someshwar, about 32 kilometres from Dwarahat, was built by Raja Som Chand, the founder of the Chand Dynasty. The name of the temple is a combination of Raja Som Chand and Maheshwara. Among the locals, the temple holds great religious significance. 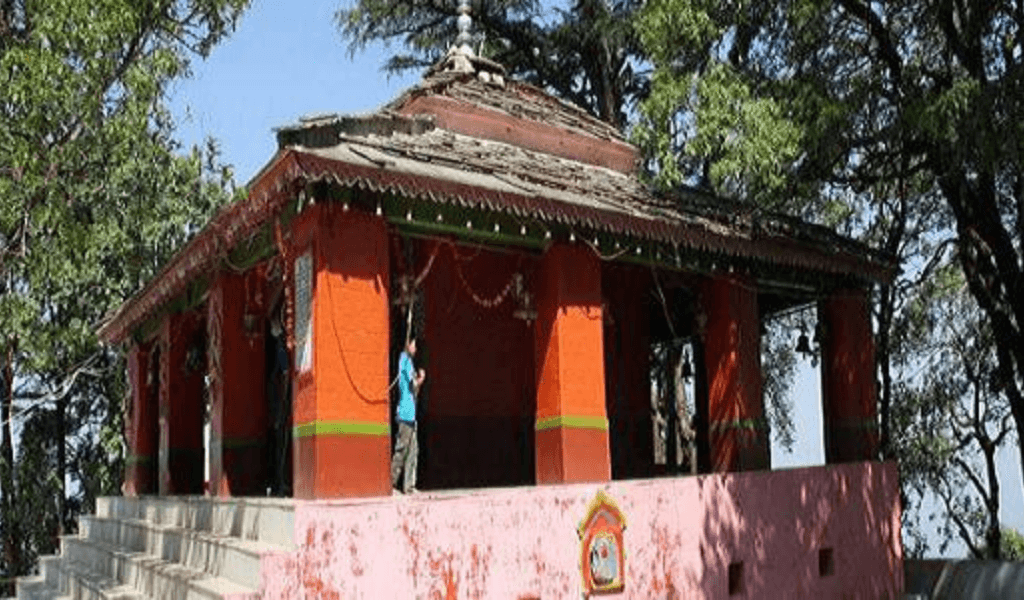 Lakhanpur temple is only 25 kilometres from Dwarahat on the Jorasi-Chaukhutia road. The Katyuri kings constructed this temple. Every year in October-November, a small fair is held at the Lakhanpur temple. 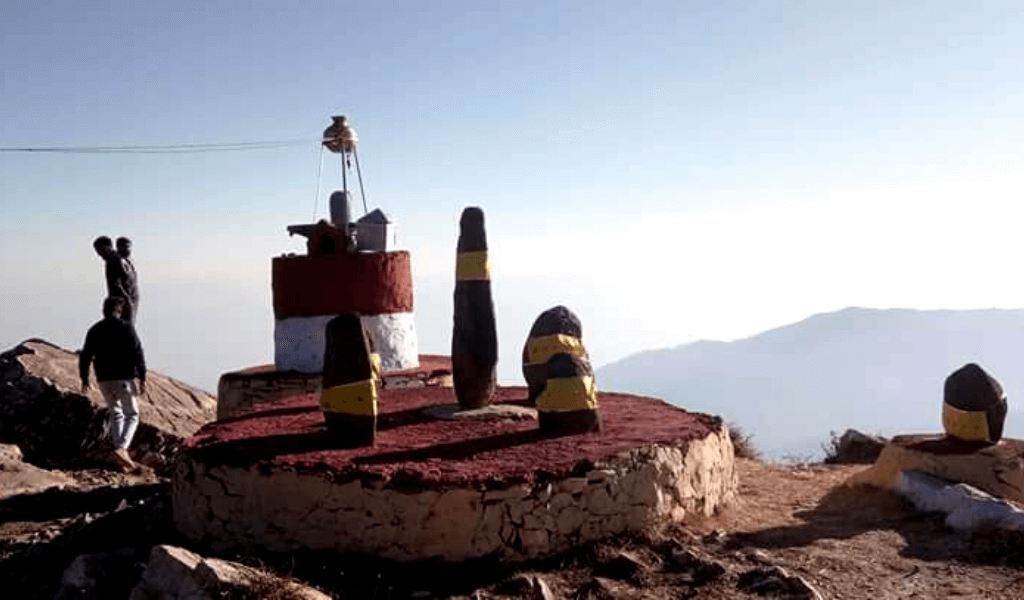 Pandukholi is 10 kilometres from Doonagiri. The Pandavas’ caves, where they lived during their exile, are located here. An easy 5-kilometre hike will take you to these picturesque caves with a glorious past. 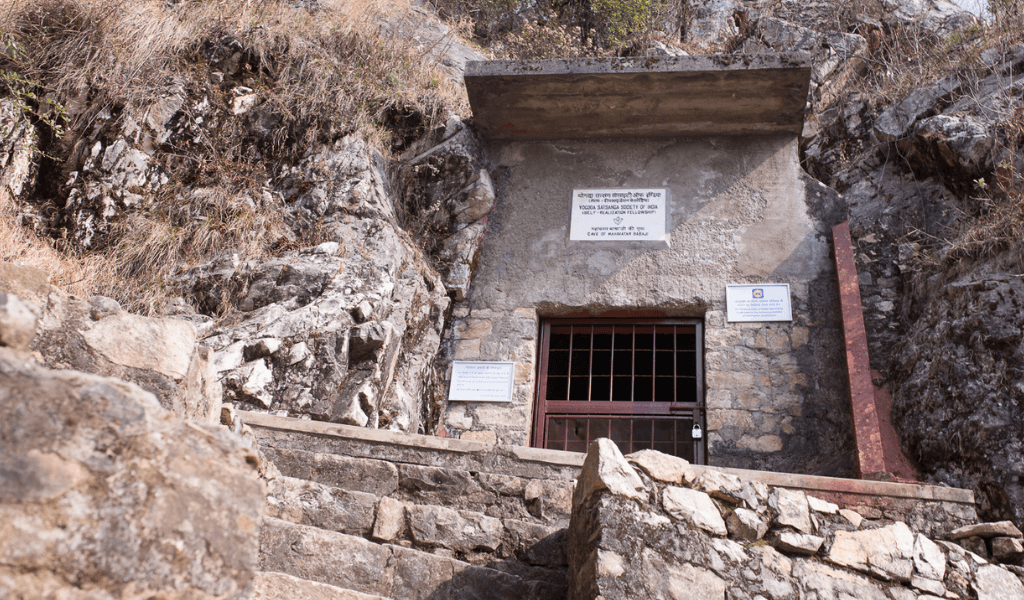 Lahiri Mahasaya is said to have been working for the Military Engineering Department in Danapur in 1861 when he was transferred to Ranikhet. During his stay in Ranikhet, he was wandering through the Dronagiri Mountains when he came across a cave summoned telepathically by Babaji. This cave has since become a pilgrimage site for devotees all over the world, earning it the moniker “Babaji’s Cave.”

Babaji Mahavatar is an ancient Himalayan yogi with an eternal body. The book “Autobiography of a Yogi” by Paramhansa Yogananda made his story public. According to the book, Babaji is an avatar (divine incarnation) who in this age of energy has resurrected the science of KriyaYoga (an advanced pranayama technique that accelerates spiritual evolution). According to the “Autobiography of a Yogi,” Babaji first taught Kriya Yoga to his disciple Lahiri Mahasaya in 1861 on Dronagiri Mountain near Ranikhet in Uttarakhand. 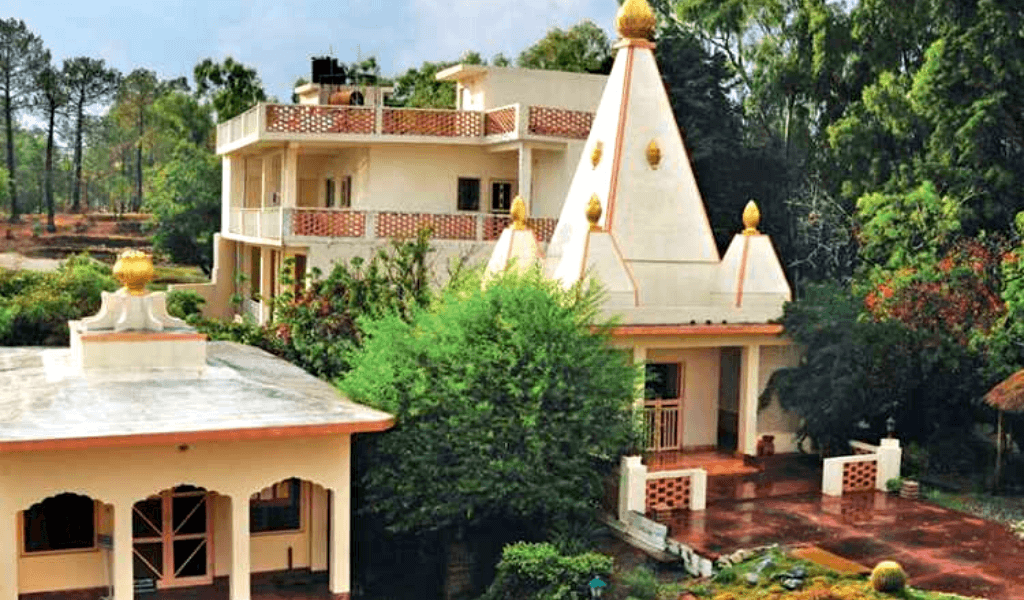 All YSS/SRF devotees are welcome to participate in individual and group retreats led by sannyasis at the Ashram. The retreats include periods of silence, the practice of Energization Exercises and group meditations every morning and evening, a review of meditation techniques, and classes on Yoganandaji’s “How-to-Live” principles. Individual retreats are available at the Ashram all year. Please plan ahead of time for both conducted and individual retreats. 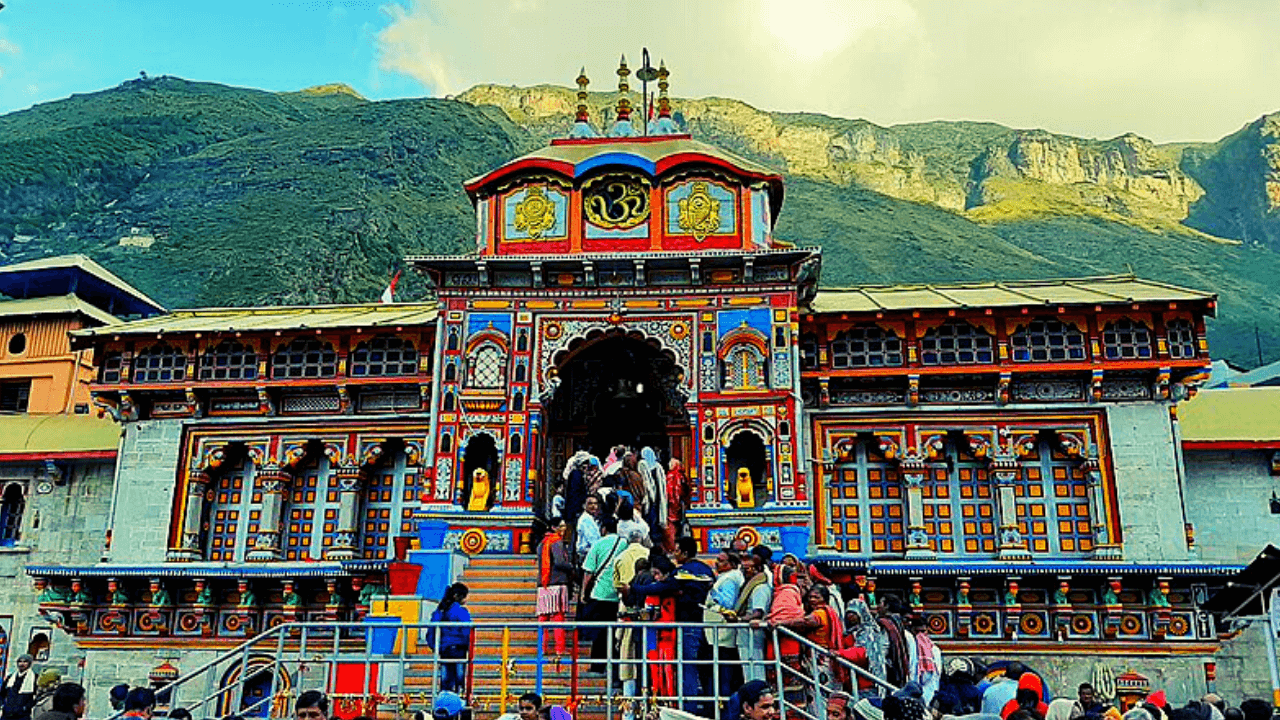 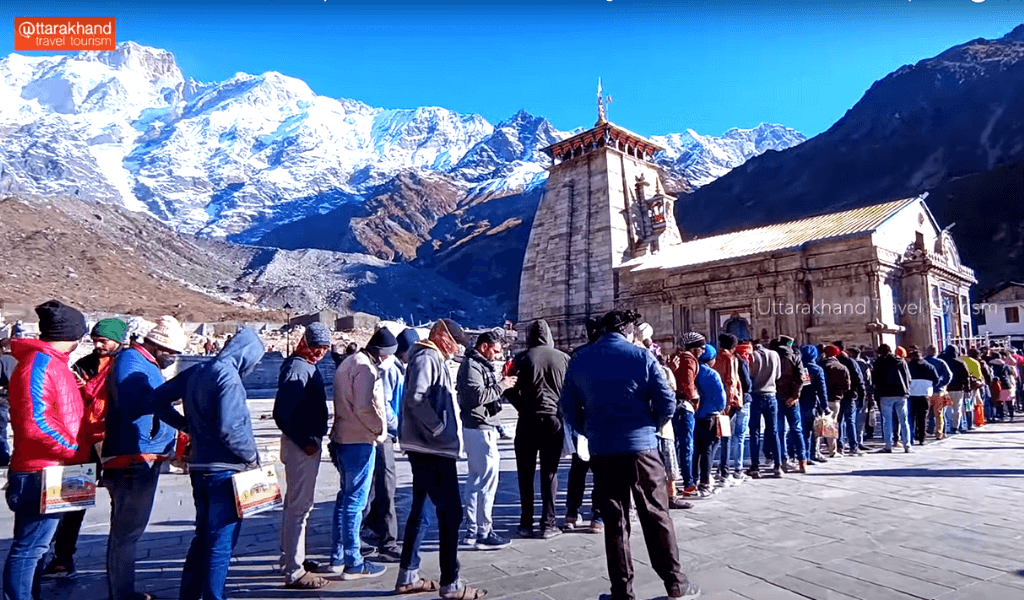 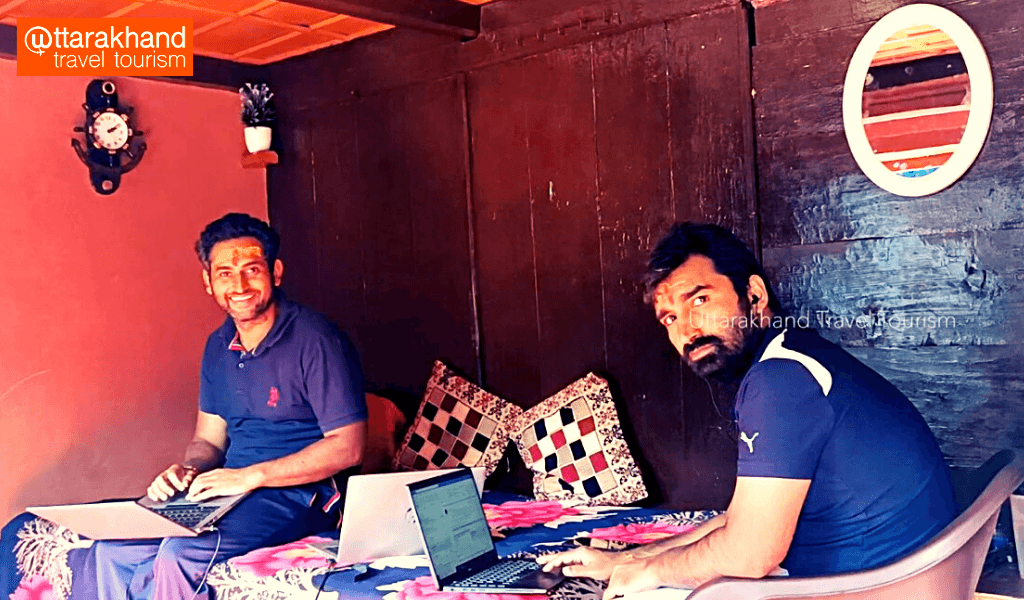 Let our Dwarahat Travel Guide help you to reach Dwarahat. Because Dwarahat is a unique travel destination, finding luxury accommodations can be difficult. However, there are comfortable accommodation options such as 1-star hotels and 2-star properties that provide good basic facilities and ample amenities for a truly delightful vacation in Dwarahat.

How to Reach Dwarahat 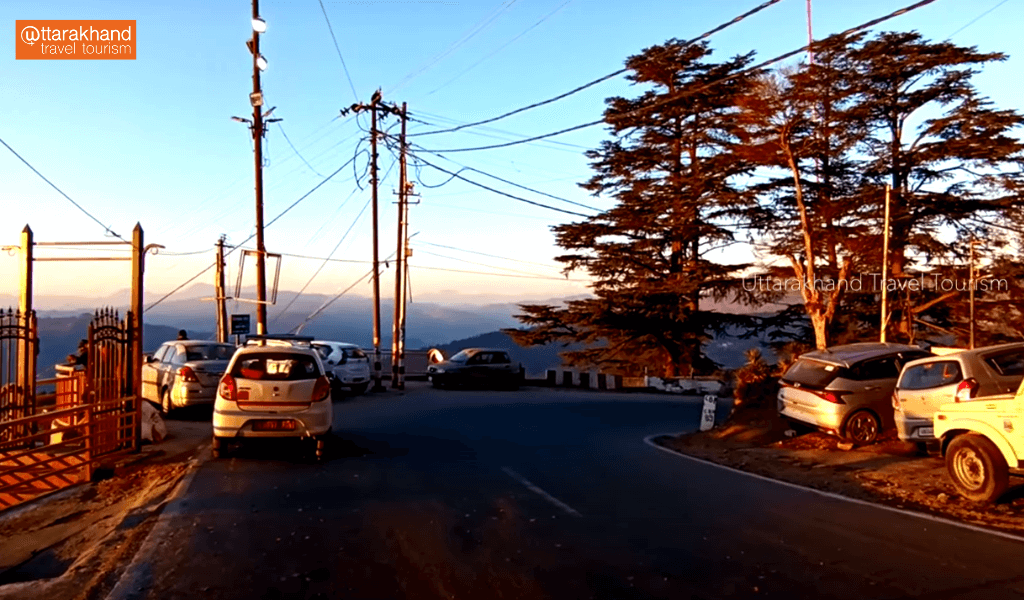 Rishikesh, Gopeshwar, and Haridwar are all easily accessible by road from Chopta. In fact, the best way to get to Chopta is to fly to Dehradun or Haridwar and then take a bus or taxi from there.

Without a doubt, the best and most convenient way to get to Dwarahat is by car, as the town is well-connected to all major parts of Uttarakhand and some parts of Northern India. There are comfortable bus services provided by both the government and private operators. Taxis for hire are also easily accessible in Dwarahat.

Pantnagar Airport, located 148 kilometres from Dwarahat, is the closest airport to this tranquil tourist destination. Once you arrive, you can easily rent a cab from the airport.

The most convenient way to get to Dwarahat is by car, as the town is located on NH-87, which connects the Kumaon and Garhwal regions, making it easy to visit both. Buses and taxis can be hired from not only the top tourist destinations in Uttarakhand but also from several major cities in North India. 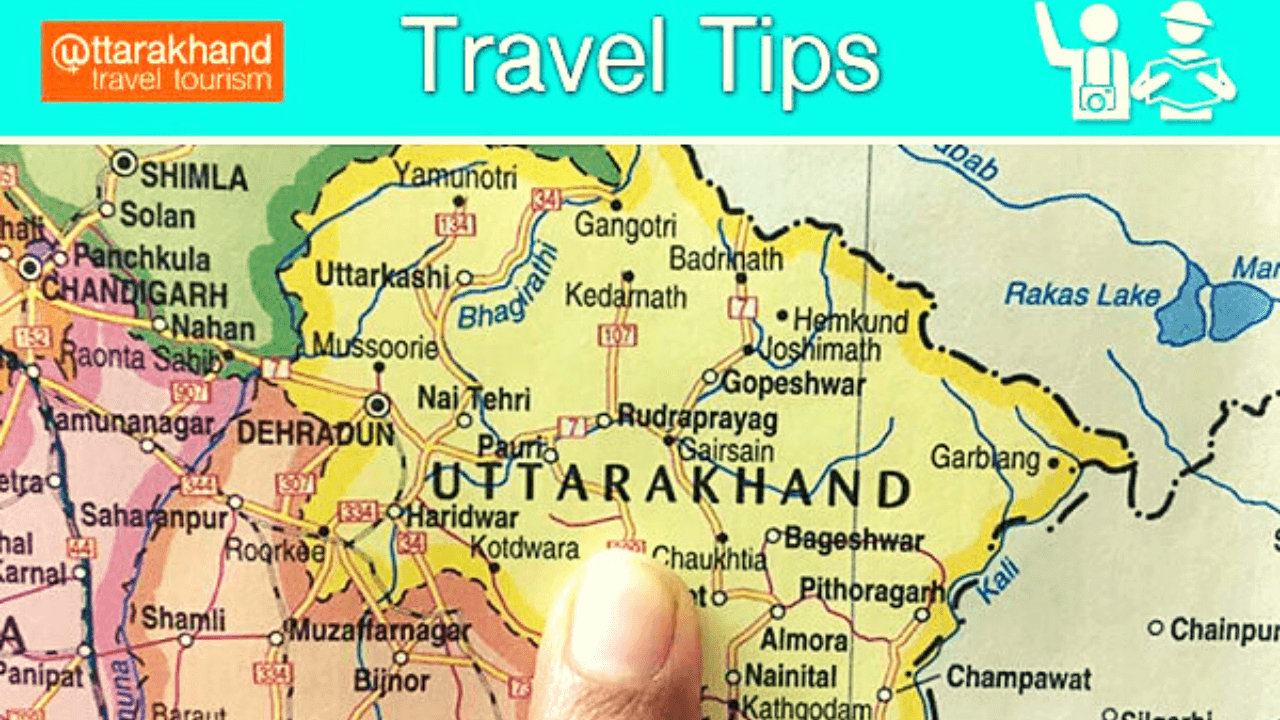 Dwarahat is a tranquil town in Uttarakhand’s ravishing Kumaon hills. It is located in the Uttarakhand district of Almora at an elevation of 1,510 metres above sea level.

In the local language, Dwarahat literally means “Way to Heaven.” It is well-known for the ancient temples built by the Katyuri kings. These temples’ architecture is similar to that of the Gurjari School of Art.