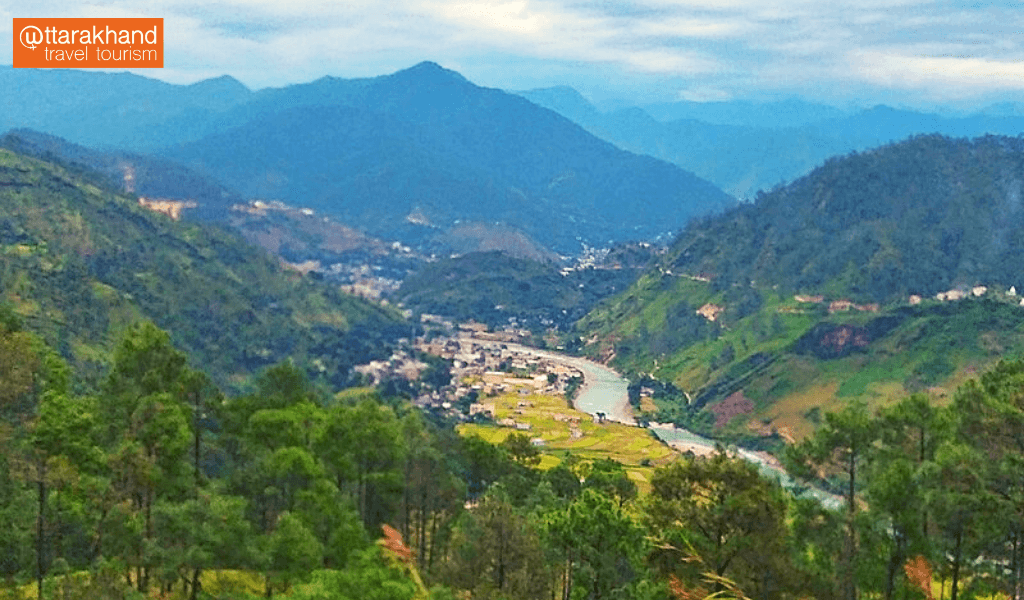 Famous Places to Visit in Bageshwar

Before Revealing the Top 10 Places to visit in Bageshwar let us know about this mesmerizing place. Bageshwar is a small temple city at the confluence of the rivers Gomti and Saryu, is a significant religious site as well as a popular tourist attraction due to its lovely atmosphere, which is capable of freeing a tired spirit from the shackles of life and death.
Bageshwar, a city and the headquarters of the district of the same in Uttarakhand, is adorned with an array of Hindu temples, including Panchnama Junnarka, Dattatreya Maharaj Temple, Hanuman Temple, Bhairav Temple, Kalika Temple, and, of course, Bageshwar Mahadev, which are major points of interest for tourists and devotees alike.
When Sage Markandeya lived here, Lord Shiva is said to have visited the Bageshwar Mahadev temple in the guise of a Bagh (Tiger). As a result, this Shiva temple is particularly well-known and has been named after this miraculous event.
Despite being one of Uttarakhand’s smallest districts, Bageshwar is home to a number of tourist attractions, including ancient temples, serene rivers, and the gorgeous villages of Vijaypur, Kanda, and Gauri Udiyar, all of which never fail to enchant visitors. The district’s incredibly rich scenic charms entice many people to plan a relaxing vacation there.

Most Famous Tourist Places in Bageshwar

Our Bageshwar travel book is jam-packed with information on the greatest locations to see and amazing activities to do, making it a must-have for anybody searching for an unforgettable trip. Let’s explore the top 10 places to visit in Jageshwar. 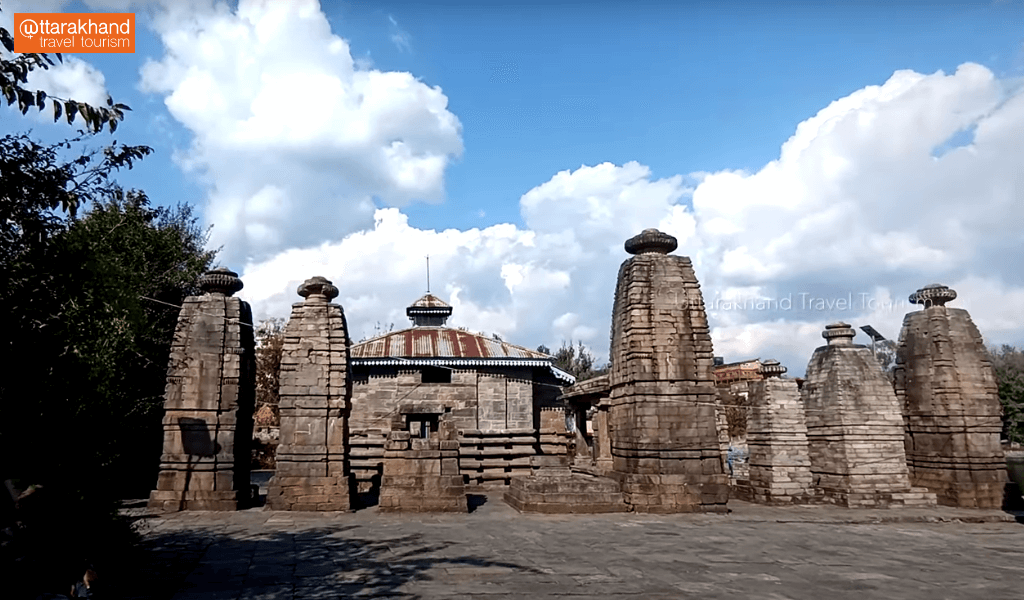 It is a well-known temple town on the banks of the Gomti River. You can visit historical temples like Baijnath Temple and Bhagwati Mata Temple while you’re here. Baijnath’s spired temple, located against the magnificent backdrop of the famed Dhauladhars, continues to draw visitors from all over the world. Shiva Vaidyanath is honoured in this temple.

It was constructed in 804 AD by two merchant brothers, Manyuka and Ahuka. Baijnath’s temple has become associated with mystic invincibility. The faithful claim that the temple will never be damaged by an earthquake. It is a magnificent monument in the Beas Valley, and it gives its name to the rustic township that has grown out of what was once a lovely village known as Kiragrama. 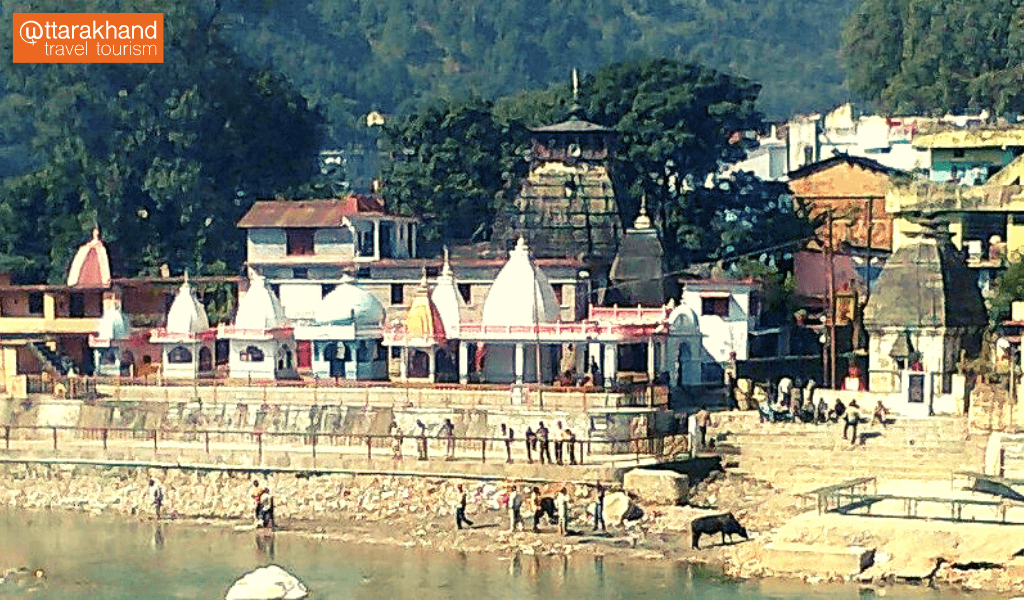 The Bagnath Temple, located in the heart of Bageshwar, is named after an episode in which the renowned sage Markandeya was visited by Lord Shiva in the form of a tiger. Bagnath literally translates to The Tiger Lord and is formed by combining the Hindi words ‘bagh’ (tiger) and ‘nath’ (higher celestial entity). The temple was built in 1450 by Laxmi Chand, the then-ruler of Kumaon, and stands at the beautiful confluence of the rivers Gomati and Sarayu.

Every year in the Hindu calendar month of Shravan, a fair is held in honour of the sage who was visited by the deity. Thousands of people gather to bathe in the holy waters. The entryway is flanked by massive bells that resonate throughout the day, thanks to the tiger-capacity gods to grant wishes.

Gauri Udiyar is a small village about 8 kilometres from Bageshwar. In Kumaoni, Udiyar refers to a small cave where tigers and other wild creatures live. This cave houses a Gauri Mata and Lord Shiva temple, as the name says. This temple, which is located in the beautiful Kumaon region, features several ancient Shiva formations. There is no knowledge concerning the temple’s origins, when it was discovered, or how old it is, although locals believe it to be ancient.

It is stated that in the summers, the natural forms of Lord Shiva emit fresh cold water, whereas, in the winters, they emit hot water! Milk is said to have manifested from these structures in the past, according to local tradition. 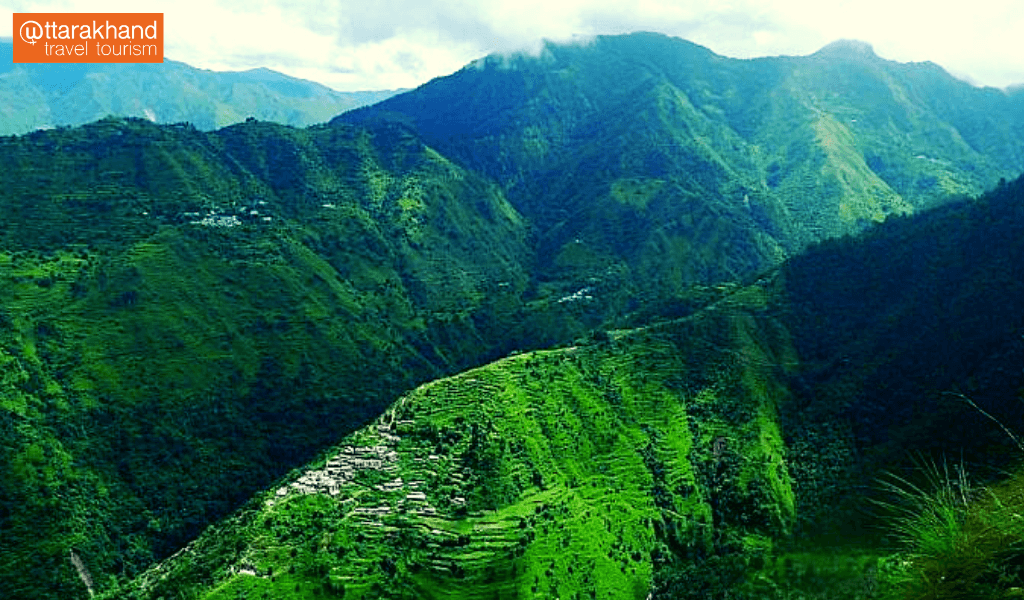 This beautiful spot, located 25 kilometres from Bageshwar, is a must-see for wildlife lovers. Kanda is close to an ancient Bhadrakali temple. Kanda, a lovely hill station and the home of peace (Shantiniketan), is located at 1500-1900 metres above sea level. It captivates the senses and imaginations of inhabitants and visitors alike, being surrounded by gorgeous mountains and terraced farms.

Locals and visitors alike admire the natural beauty of the area and benefit from the clean air and healthy environment that mountain scenery provides. There was formerly a local caste called Kanyal, according to traditions and older residents. This caste is known as Kanda. Kanda’s hills are particularly appealing to foreign visitors, and it’s often compared to the Himalayas. 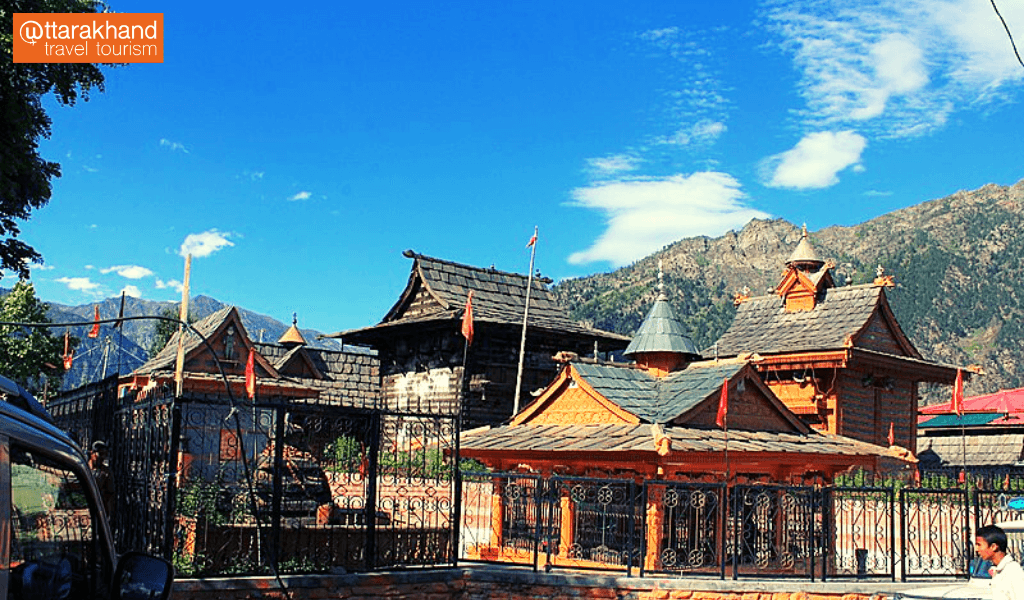 The Hindu goddess Chandika Mai, sometimes known as Kali, is honoured in the Chandika Devi temple. This sacred shrine is located in Uttarakhand’s Bageshwar district, around half a kilometre distant.

In the life of the people, the temple has religious significance. During the Navratras, a large number of devotees go from far away to attend this temple. The Chandika Devi Temple is revered by the locals, who attend daily pujas there. 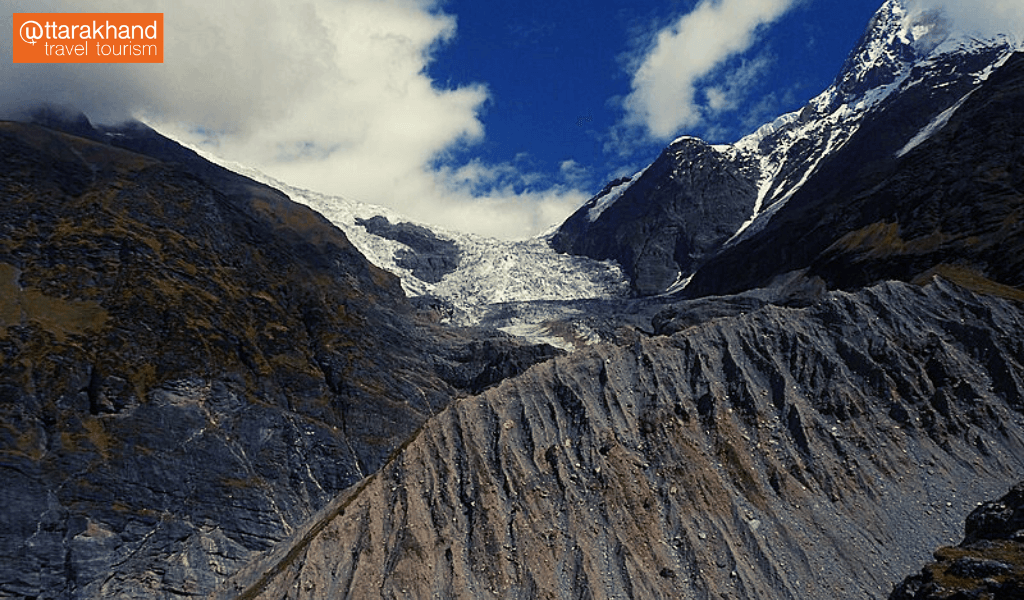 The Pindari Glacier, which is quite popular among trekkers all over the world, is located in Pindari Valley, at a height of 3660 m, to the southeast of the Nanda Devi and Nanda Kot mountains. The walk to this place begins in Song, which is 36 kilometres from Bageshwar. After reaching Song, another 45 kilometres of hiking is required to reach Pindari Glacier. 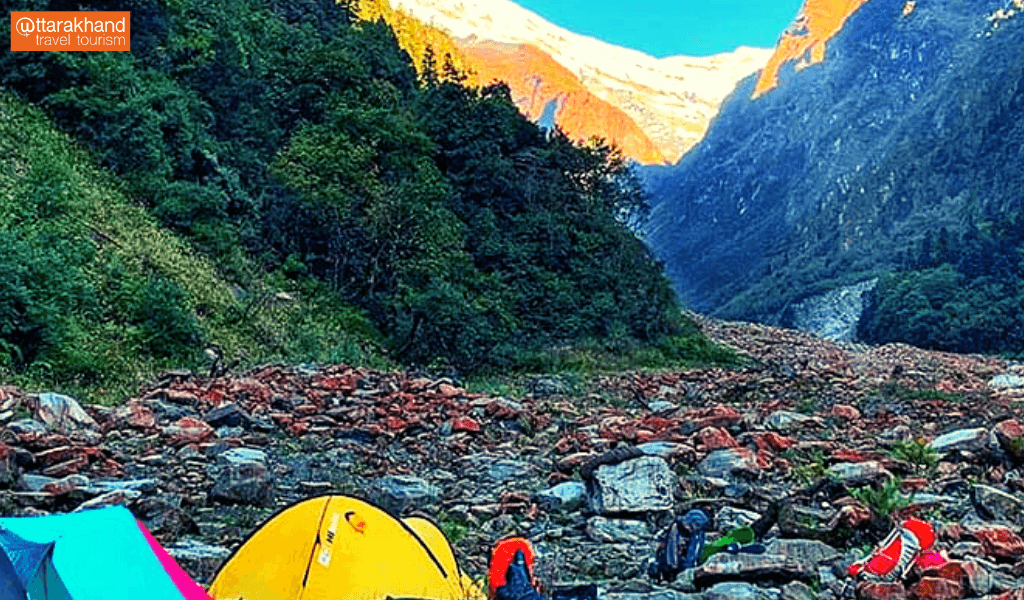 Sunderdhunga Glacier, which is close to the Pindari and Kafni Glaciers, is located in the upstream Sunderdhunga Valley, which has an elevation range of 3200 to 6050 metres and is known as the ‘Valley of Beautiful Stones.’ In comparison to the Kafni and Pindari, the trek to Sunderdhunga Glacier is more difficult. 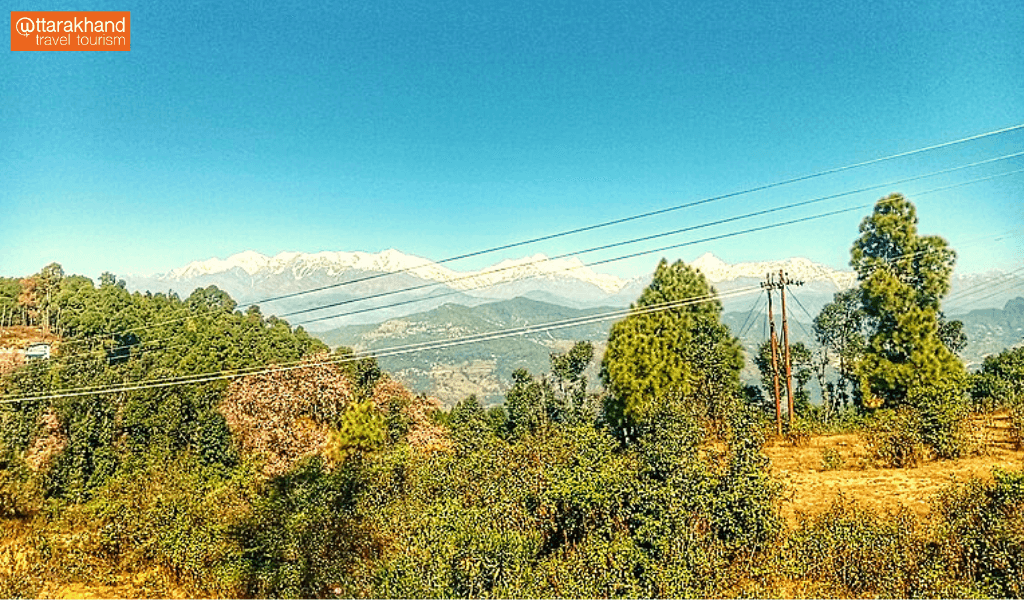 Vijaypur, about 30 kilometres from Bageshwar, is a popular tourist destination where visitors come to take in the scenery and recharge their batteries. The location provides breathtaking views of snow-covered mountains.

Vijaypur is bordered by numerous peaks and has pleasant plains. It’s the ideal spot for soaking in the stunning vistas of the snow-capped Himalayas. Many folks come here to rest and take in the scenery. The location will undoubtedly delight you because it gives stunning views of the Himalayan mountains and will enchant you. 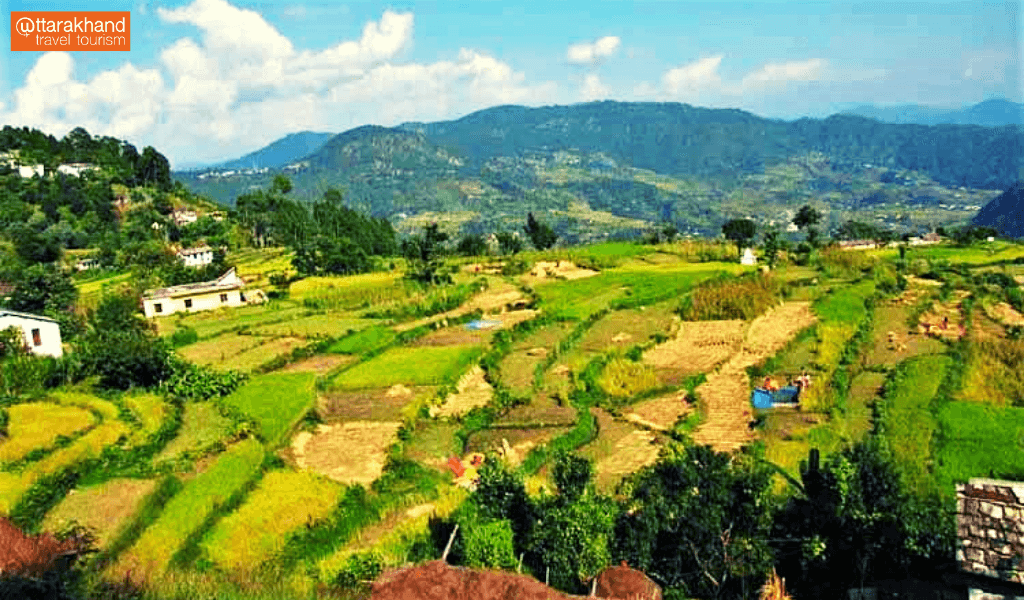 Bigul, a small hamlet in the Bageshwar area, offers spectacular vistas of the Himalayas, especially the Nanda Devi and Panchachuli peaks. This location is also historically significant since Britishers employed Biguls (an instrument used to make announcements) to call local people in order to collect taxes.

Bigul, around 32 kilometres from Bageshwar town, is a good area to spend alone. Dholinaag Temple, which is located at the village’s highest point, is a significant temple for the inhabitants. 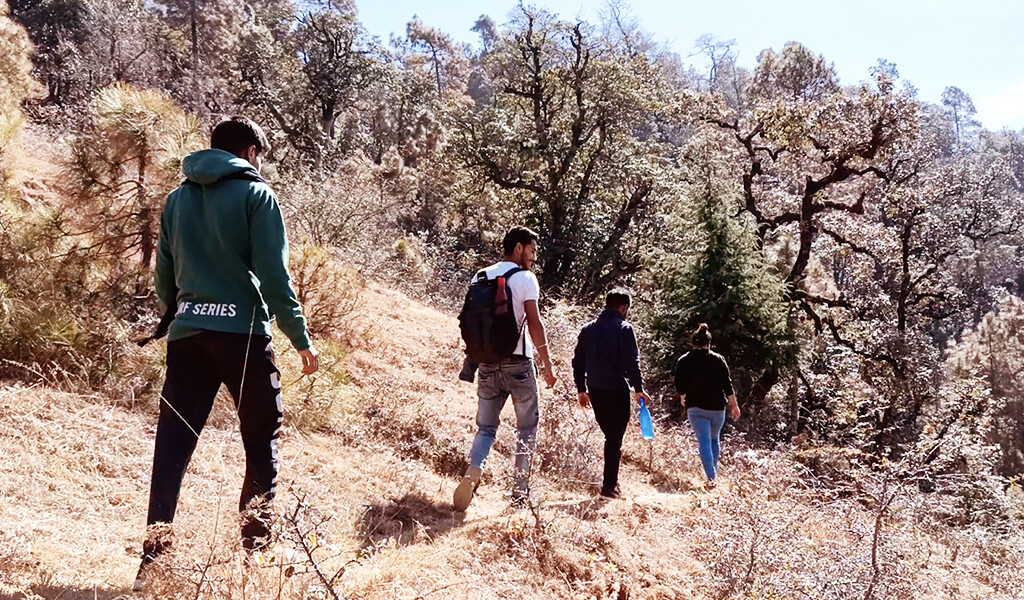 The battle between the Kauravas and the Pandavas is said to have taken place in Pandusthal. This area, which gives one of the most stunning vistas of the Himalayas, can only be reached after a 20-kilometre journey.

The Pandusthal’s view is so spectacular that you can even see the dangling glaciers near the peaks. To begin the trek, one must first go to Baisani by bus or automobile from Bageshwar (25 km). The walk begins at Baisani and lasts around 15 kilometres. It may be completed in a day. You can even remain there overnight and explore the area before returning the next day.

The gorgeous surroundings, glaciers, rivers, and temples of Bageshwar are well-known. Bageshwar is located at the junction of the Saryu and Gomati rivers and is flanked to the east and west by the mountains of Bhileshwar and Nileshwar, as well as the Suraj Kund in the north and Agni Kund in the south.