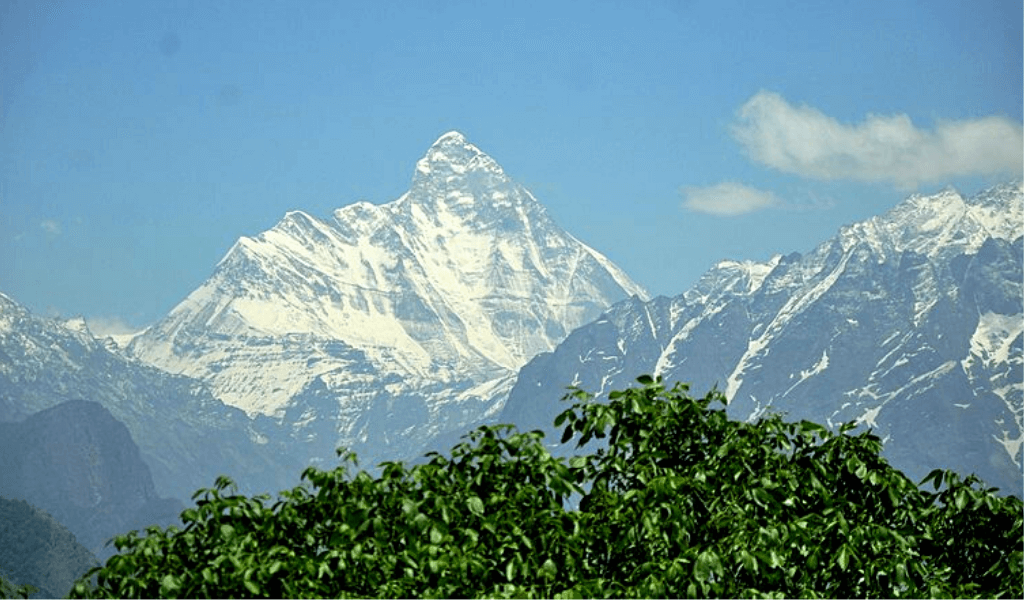 When Mount Kanchenjunga, which stands on the border of India and Nepal, is excluded, Nanda Devi, which literally means “Bliss-giving Goddess,” is the name given to the mountain that ranks second among the top tallest peaks in India. This magnificent peak is located in the Garhwal region of Uttarakhand’s Chamoli district and is part of the Greater Himalayas.

Nanda Devi peak, which has the Rishi Ganga valley and the Goriganga valley flowing on its west and east sides, is considered the Patron Goddess of the Uttarakhand Himalayas and holds great religious significance in the Hindu religion. Nanda Devi peak, with an elevation of 7,816 meters above sea level, and the other surrounding mountains encircle the beautiful Nanda Devi Sanctuary, protecting the fragile ecosystem.

It is a two-peaked massif, with the western peak being higher than the eastern peak, which is now popularly known as Sunanda Peak and was previously known as Nanda Devi east. Both summits are known as the Goddesses Nanda and Sunanda’s peaks. The Nanda Devi peak in the Uttarakhand Himalayas is considered to be the most popular peak for trekking, peak climbing, and other adventure activities.

According to records, British explorers Eric Shipton and H.W Tilman, along with three Sherpa companions, discovered a way through the Rishi Gorge into the Nanda Devi sanctuary in 1934. However, during the British-American expedition in 1936, H.W Tilman and Noel Odell climbed the Nanda Devi summit. The route they took was the south ridge, also known as the coxcomb ridge, which leads directly to the main summit.

The same route was used successfully by an Indian team led by N. Kumar in 1964. Aside from the coxcomb route, there are two other routes to the Nanda Devi summit: the northwest buttress and the west ridge. Uttarakhand is a dream destination for mountaineering, which is also one of the reasons for the state’s enormous popularity in tourism. The trek to Nanda Devi begins once you arrive in Munsiyari, which is the closest town with motorable roads.