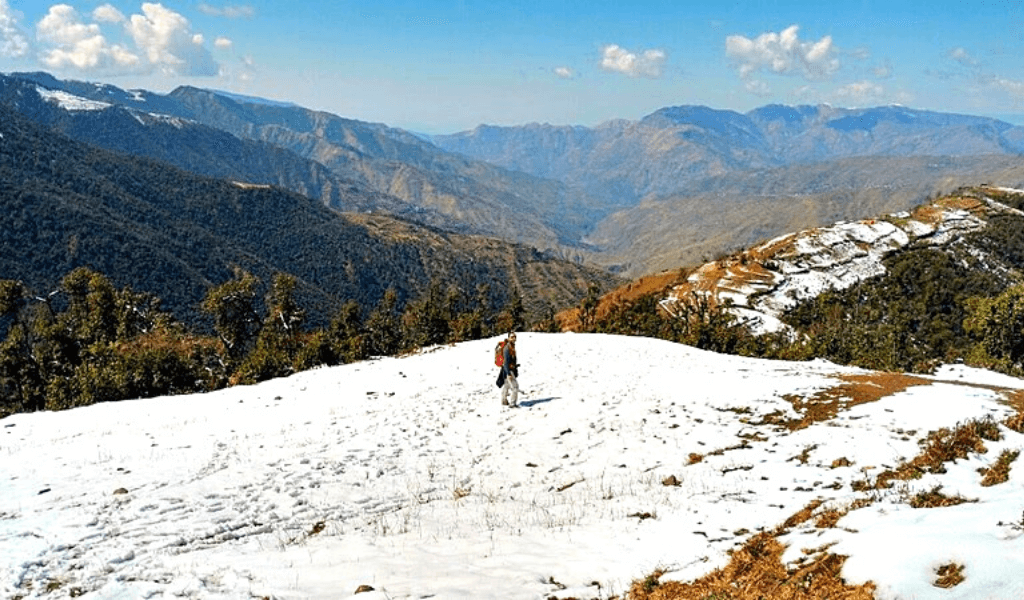 The Nag Tibba trek, also known as the ‘Mountain of the Serpent,’ begins northeast of Mussoorie, at the foothills of the Garhwal Himalayan ranges, at an elevation of 3,048 meters. The fact that the locals have been offering prayers (puja) to the Snake God (Nag Devta) at this peak attests to its sanctity. They believe the Snake God guards their cattle against snake bites.

The Mussoorie-Nag Tibba trek will satisfy both novice and experienced trekkers. It is an idyllic and ideal weekend trek for visitors coming from Delhi. The trek allows visitors to enjoy a variety of enchanting experiences, such as seeing the majestic snow-capped mountains, camping under the star-lit night sky, and walking through verdant lush forests.

The Nag Tibba trek begins in the village of Pantwari, passing through the hill station of Mussoorie. Many charming little villages surround Pantwari, such as Bandsari village, Kori village, and so on. The trail then descends to the villages of Devalsari and Thatyur.

The distance between Pantwari and the peak of Nag Tibba is 8 kilometers. Trekkers will pass through ancient forests of deodar and oak, which are teeming with exotic wildlife. This is a trek that will be remembered for the rest of one’s life by both adrenaline-seeking adventurers and nature-loving trekkers.

Nag Tibba is located in the Garhwal Himalayas, which are located to the northeast of Mussoorie. The peak is 3048 meters above sea level. It has long been thought to be the home of the Snake God, or ‘Nag Devta.’ Local villagers make the trek to the peak on a regular basis to pray to the Snake God to protect their cattle from snake bites.

Because of its panoramic beauty and high elevation, this location has drawn trekkers and adventure seekers. Trekkers can enjoy breathtaking views of various peaks from Nag Tibba, including the Bandarpunchh peak, the Gangotri group of peaks, Kedarnath peak in the north, Doon Valley, and the snow peaks of Chanabang. Nag Tibba is also known as Serpent’s Peak. It is the highest peak in the Nag Tibba range of the Garhwal Himalayas, standing at 9915 feet.

The Nag Tibba Trek is best done in the summer months, from April to June, and in the winter months, from October to December. The best months to visit Nag Tibba for those who want to experience snowfall or snow trekking in Chopta are January to March.

Summer in Nag Tibba is pleasant and refreshing. The Himalayas are visible in the distance. A cool breeze is always blowing to keep you comfortable. It is advisable to bring light woolens with you in case the night becomes colder.

In the monsoons, the lush greenery of Nag Tibba is irresistible. Nothing beats sipping a cup of tea while gazing at the snow-capped peaks of Nag Tibba while raindrops dance all around you. There may be landslides that cause roads to be closed for hours, but the scenic beauty of Nag Tibba is worth the effort. Don’t forget to bring raincoats!

You can’t go wrong with the Nag Tibba trek in the winter if you’re looking for peace and quiet. There will be snowfall during the winter, but you can still enjoy the spectacular view of Nag Tibba which is unrivaled. This is how heaven on Earth will appear. Winters in Nag Tibba can be bitterly cold, so bring plenty of warm clothing.