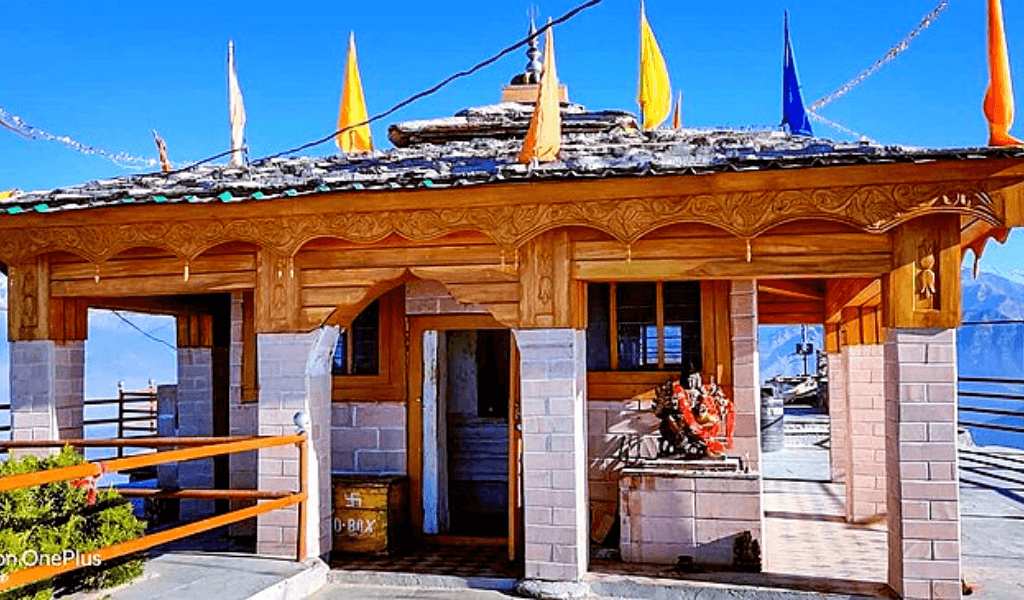 Kartik Swami is a temple dedicated to Lord Shiva’s elder son, Kartikeya, with a mystic ambiance and breathtaking views. The popular Hindu temple is perched on a hilltop at an elevation of 3050 m, near Kanak Chauri Village on the Rudraprayag-Pokhari route in the Uttarakhand district of Rudraprayag.

To reach the temple, one must embark on a 3 km thrilling trek that begins in Kanak Chauri Village. The trek’s route is rugged, but it guarantees breathtaking scenery to enjoy nature’s splendor. The religious site dedicated to Lord Kartikeya in the Garhwal Himalayas has a long history.

According to Hindu mythology, Lord Shiva challenged his sons Lord Ganesha and Lord Kartikeya that whoever completes the seven rounds of the universe first will be worshipped first. Hearing this, Lord Kartikeya set off on his vehicle to circle the universe, while Lord Ganesha took seven rounds of his parents, Lord Shiva and Goddess Parvati. Lord Shiva, impressed by Ganesha, granted him the honor of being worshipped first.

As a result, Lord Kartikeya expressed his displeasure with the decision and offered his body and bones in reverence to his father. Because it is believed that this entire incident occurred here, the temple is named Kartik Swami. In South India, where he is thought to have settled later, Lord Kartikeya is also known as Lord Kartik Murugan. Apart from being a popular tourist destination, Kartik Swami is also known for its breathtaking sunrise and sunset views.

Evening prayers, mantra chanting, and maha Bhandara are the temple’s main draws for visitors. Furthermore, the shrine houses an idol of Lord Kartikeya, and a few festivals and events, such as Kartik Poornima and the 11-day-long Kailash Yatra, are celebrated with zeal.

Once here, visitors can see the snow-clad Himalayan peaks of Bandarpoonch, Kedarnath Dome, Meru & Sumeru, Chaukhamba Peak, and Neelkanth, Dronagiri, Nanda Ghunti, Trishul, and the Nanda Devi group of peaks. Aside from the breathtaking views and indescribable feeling, the trek to the temple allows for bird watching, camping, and village tourism.

Because the temple is open all year, visitors can come at any time. Despite this, summer and winter are considered the best seasons to visit the temple because monsoon rain disrupts the trek and damages the roads.

SUMMER
The summer season here starts in April and lasts until June. The average peak temperature in summer ranges from 15°C to 20°C. During the months of March and April, there is an abundance of rhododendron, which can be seen on the trekking route. As time passes.

MONSOON
During the months of July to September, the district of Rudraprayag, as well as the entire state, experiences heavy rainfall. Heavy rain makes trekking difficult, as does the possibility of road blockage. There is abundant vegetation in August and September. As a result, it is best to check the weather forecast before visiting the Kartik Swami temple during the monsoon season.

WINTER
The month of October marks the start of the winter season, which lasts until March. From November to January, the snow-covered Himalayan ranges are visible in all their glory. Furthermore, the temperature ranges from 0°C to 10°C during these months. When visiting the temple in the winter, make sure to dress warmly.

As a small destination, Vishnuprayag has fewer accommodations. As a result, Joshimath is a better place to find a variety of hotels near Vishnuprayag. The town has a plethora of excellent lodging options ranging from budget to mid-range, ensuring a comfortable and memorable stay.

How to Reach Kartik Swami Temple

The Kartik Swami Temple is accessible via a 3 km trek from Kanak Chauri Village, which is only 40 kilometers away. The Kanak Chauri village is located on the Rudraprayag-Pokhari route, for which cabs can be hired from various parts of the state as well as Delhi. As a result, roads are the best way to get to Kanak Chauri, from which one must trek to Kartik Swami Temple.

BY AIR
The nearest airport is Jolly Grant Airport in Dehradun, which is approximately 192 kilometers away. To get to Rudraprayag, take a taxi or cab from the airport. Following that, a shared jeep ride from Rudraprayag to Kanak Chauri and a 3 km trek to the temple.

BY RAIL
To reach the temple via the railway network, take a train to either Haridwar or Rishikesh railway stations, which are the closest railway stations to Rudraprayag and are located approximately 140 km and 165 km apart. Because Haridwar Railway Station has better connectivity with major cities in India, it is recommended to book train tickets for Haridwar. When you arrive at the station, take a taxi or cab to Rudraprayag or directly to Kanak Chauri. The temple is a three-kilometer hike from Kanak Chauri.

BY ROAD
The Kartik Swami temple is well-connected by road. As a result, one can take a cab or taxi to Kanak Chauri. Interstate buses run from ISBT Anand Vihar in Delhi to Rudraprayag, Rishikesh, and Srinagar. After arriving at Kanak Chauri, you’ll need to walk 3 kilometers to reach Kartik Swami Temple.