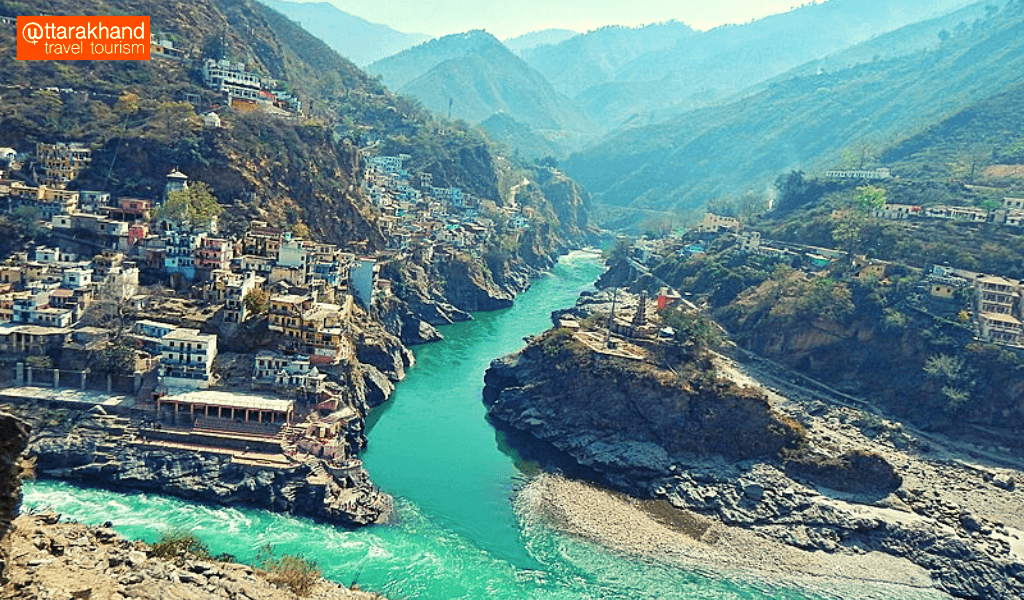 Devprayag, one of the most sacred places in Uttarakhand, is located at an elevation of 830 meters above sea level. The town is located in the Tehri Garhwal district, and its name is derived from Sanskrit, where Dev means God and Prayag means confluence. As a result, Devprayag means ‘Godly Confluence.’ Furthermore, Devprayag is a location where two important rivers in Uttarakhand, the Alaknanda, and the Bhagirathi, meet to form the even more significant and popular Ganga.

Devprayag is a small town that also serves as a Nagar Panchayat. The location is part of Panch Prayag and holds great significance in the hearts of Hindu devotees. According to Hindu mythology, Lord Rama and King Dasharatha performed self-mortification here in Devprayag. The town is dotted with several large and small temples and is surrounded by high mountains with a view of the majestic Dasharatha Chal Peak.

Our Devprayag travel guide is jam-packed with information on the best places to visit and amazing things to do, making it a must-have for anyone looking for an unforgettable travel experience.

Best Time to Visit in Devprayag

There is no particular season when the town sees an increase in visitors. Tourists visit this location all year because of its sacred significance and beautiful surroundings. Even though the summer season is considered the best time to plan a trip.

Devprayag’s summer climate is quite pleasant. The temperature has been recorded as moderate, ranging from 18°C to 31°C. Summer is considered to be from April to June in Devprayag. If you don’t want to carry heavy clothes or get drenched like in the monsoons, this is the best time to plan your vacation here.

The monsoon season begins in July and ends in September. Monsoon in Devprayag is not a season for sightseeing due to heavy rainfall and road closures. Regardless, a large number of tourists come here to explore the revitalized town. However, before planning a trip here during the monsoon, check the weather forecast.

Winter is another excellent time to visit with family or friends. The month of October heralds the start of the winter season, which lasts until March. During these months, the temperature remains extremely cold, occasionally falling to 0°C or lower. During this time period, however, you can see the beautiful scenic views of the town, which attracts a lot of tourists.

Places to visit in Devprayag

The town is part of Panch Prayag and is known for its immense spiritual significance. Here you can see the town’s main tourist attractions, which are the number of shrines.

Among the well-known tourist destinations are the bridges built across the Alaknanda and Bhagirathi rivers. The water beneath appears green in color, which is quite a sight to see from the bridge.

Kyun Kaleshwar Temple, built by Adi Shankaracharya, the founder of Advaita Vedanta, is a popular tourist destination in Devalgarh. The temple is dedicated to Lord Shiva and also contains deities of Goddess Parvati, Lord Ganesha, and Lord Kartikeya.

Raghunath temple is dedicated to Lord Rama and is regarded as one of the best tourist attractions in the entire district of Tehri. Sculptures of Goddess Sita and Lord Lakshman can also be found here. Raja Jagat Singh constructed this holy shrine.

The temple, dedicated to the Goddess of Power, offers a view of the Kedarnath, Badrinath, and Surkanda peaks. Inside the temple, visitors can also view the statue of Goddess Sati.

Dashrath Shila Temple, another Hindu temple in town, is located on the bank of the enthralling Shanta River. Shanta is said to be King Dasaratha’s daughter.

Visitors to Devprayag will find well-kept lodging facilities. There are a few hotels near Kyun Kaleshwar Mahadev Temple, Suspension Bridges, Dashrath Shila Temple, and Pentagon. All of the hotels in the area provide mediocre services but are willing to meet their guests’ basic needs. Accommodation is also available in nearby Rishikesh, which has a wide range of hotels and ashrams. There are also tent accommodations and jungle resorts to make your stay here more enjoyable.

How to Reach Devprayag

Devprayag lacks an airport and a railway station. The nearest airports and railway stations to Devprayag are Jolly Grant Airport in Dehradun and Rishikesh and Haridwar, respectively. The location is also well connected by road to major cities in Uttarakhand.

The town lacks its own railway station. Thus, the nearest railway stations from the town are Rishikesh and Haridwar, which are approximately 72 and 97 kilometers away from Devprayag, respectively. To get to Devprayag, take a taxi or a bus from either location.

This mode of transportation makes it simple to get to Devprayag. The town is well-connected to Uttarakhand’s cities and towns. Furthermore, taking the bus is the most cost-effective way to get to Devprayag. Cab services from Dehradun and Haridwar are also available, providing a direct and comfortable route to Devprayag.