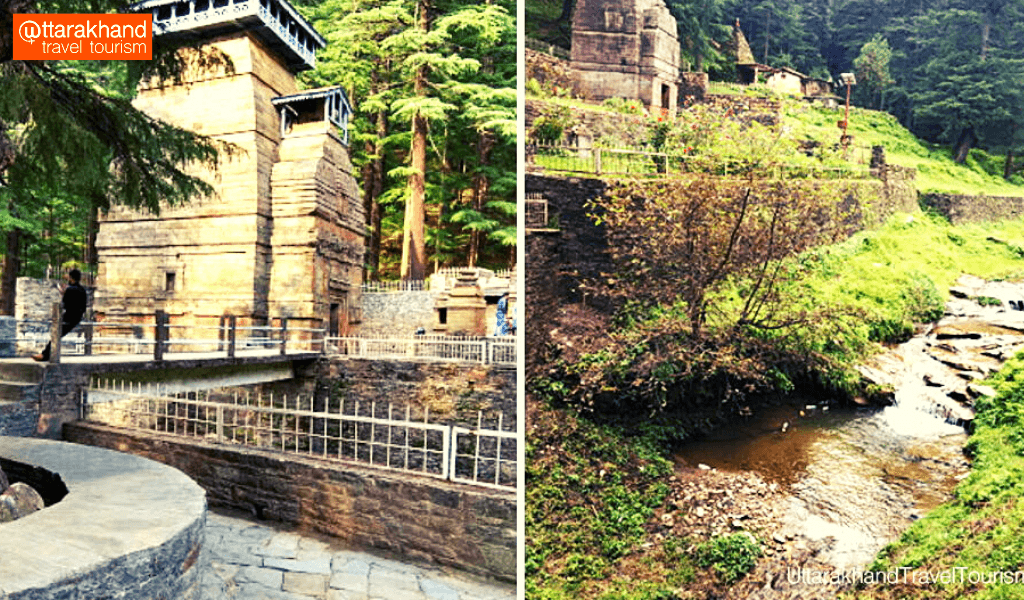 The Dandeshwar Temple is the epitome of Nagar-style architecture, standing as tall as you can crane your neck. It is thought to house Lord Shiva’s shrine as the staff bearer, hence the name Dandeshwar, or the bearer of the ‘dand,’ the staff.

A song carved in stone. Each structure contains a magical melody. The temple complex, built over a gurgling stream with green deodars as a backdrop, contributes to bringing the area’s spiritual history to life. The potency and power of the spiritual abound in temple lore passed down by word of mouth from generation to generation.

The temple must be seen in order to feel the pulse and energy of the place. After crossing a small wooden bridge, you descend the steps to a massive complex dotted with the main temple and attendant shrines… When one enters the dimly lit main temple, with its rocky walls and stone-cold floor, the starkly beautiful sanctum sanctorum, one is transfixed by the rhythmic pounding of pure energy.

The animated and vibrant peace has captured my attention. A seemingly contradictory symmetry of calm and force. The elusive and invisible appear to mingle with the silence. The atmosphere is rich with the realization of God’s terrifying power mingling with the mellow strength of his other avatars.

The Lord’s power can be felt in every nook and cranny, every stone crevice, and every figurine carved into the stones. It’s excellent artwork. The temples in the complex are built in the phamsana shikhara style and are thought to date from the 9th to the 10th century AD.

The oldest of the Jageshwar Temples is the Dandeshwar Temple. Though it is the least well-known of the Dham’s temples, it dates back to pre-feudalistic times. The wrought silver image of an unknown donor holding a lamp is evidence to support this belief. In recorded history, there is no evidence of any king donating to Dandeshwar.

The image is thought to be of Raja Paun. Paun is a dialectical variant of the word Pandava. The cult image of the temple as a living rock is far more significant. In the orthodox Brahmanical context, this is an unlikely symbol of worship.