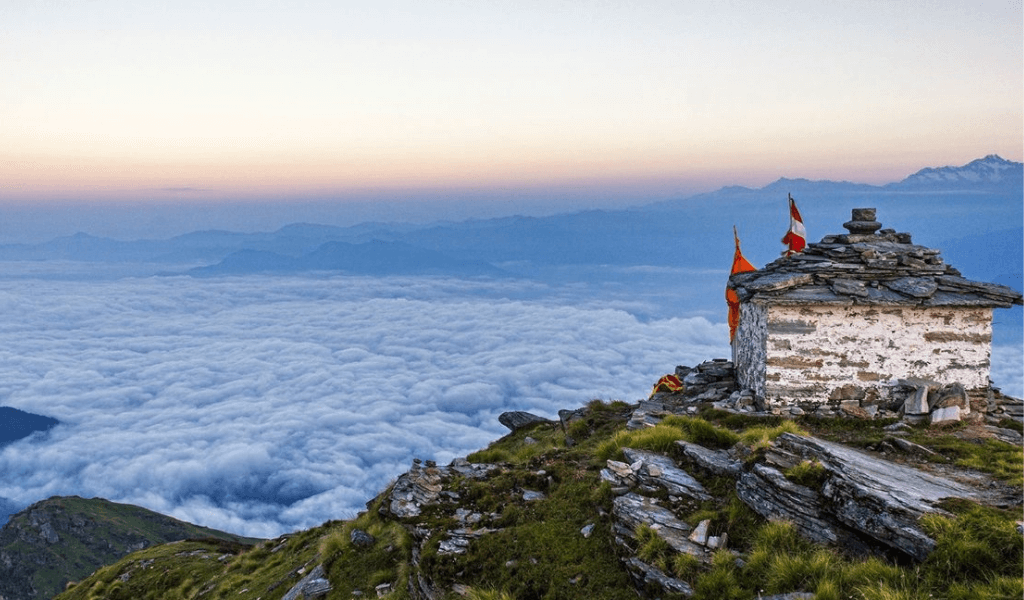 Chopta valley is located at an elevation of 2,680 metres and is surrounded by an imposing forest of oak, deodar, and rhododendron that shadows a rich bed of flowering plants. The spellbinding Chandrashila Summit Trek is distinguished by the grandeur of its Himalayan Peak.

The Chandrashila Summit Trek, one of the most beautiful treks in the Garhwal Himalayan region, winds through beautiful meadows and unpaved trails. When you reach the summit, you will be rewarded with a spectacular view of Himalayan peaks such as Nanda Devi (7,817 metres), Trishul (7,120 metres), and Kedarnath (6,831 metres), Bandarpunch (6,316 metres), and Chaukhamba (7,138 metres).

It is best to start early in the morning from Chopta to Tungnath, which is the world’s highest Shiva Temple at 3,680 metres. The temple is one of the Panch Kedar, nestled in the shadow of the Chandrashila peak. Tungnath is thought to be over 1000 years old and has a legend that confirms some of the incidents depicted in the Mahabharata epic.

An hour’s ascent from Tungnath temple ends at the Chandrashila summit, from which one can capture the silvery sheen of the Himalayan range, dotted with several peaks, as well as all the green valleys and deep gorges.

The Chandrashila summit trek, which is accessible all year, is regarded as one of the more moderate treks in Uttarakhand’s Indian Himalayan region. The trail takes about 3-6 days to complete. The journey offers rare glimpses of an ancient Garhwal Himalayan culture as well as natural hues.

Summers (April – June) and winters (October – December) are the best times to visit Chopta. Winter treks are also available in Chopta, with the best months to trek being January to March.

During the summer, the weather in Chopta remains pleasant. The Himalayas are clearly visible, and a cool breeze can be felt early in the morning and late in the evening. It is recommended to bring light woollens.

Winters: The region is blanketed in snow during the winter season, and accommodation options are limited. However, Chopta looks best in the winter, and the trek becomes more difficult. It is recommended to bring heavy woollens.