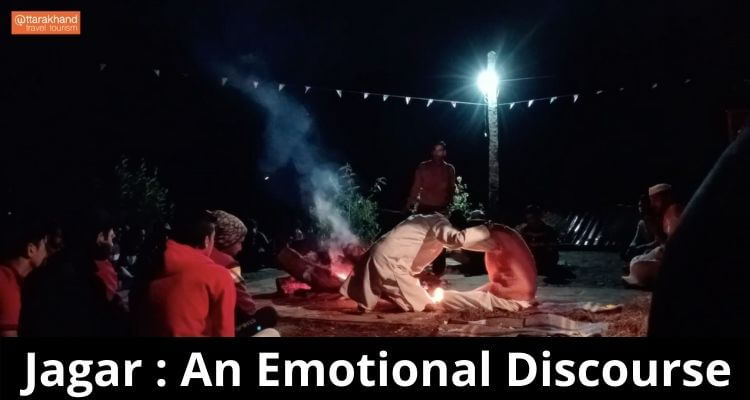 Jagar is a ritualised style of worshipping the 33 koti Devi Devta that is performed in Uttarakhand’s hills, both in Kumaon and Garhwal. Jagar is a rite in which gods and local deities are awakened from their slumber and requested for blessings or remedies. The ritual is associated with the concept of divine justice and is performed to seek penance for a crime or to seek divine justice for some wrong. The word Jagar is derived from the Sanskrit root Jaga, which means “to awaken.”
Music is the means through which the gods are summoned. The singer, or Jagariya, sings a ballad of the gods with allusions to famous epics such as the Mahabharata or Ramayana, which narrate the adventures and achievements of the god being summoned. Jagar singing has evolved through time into a much-loved art form, whose practitioners are frequently lauded as living heritage.
These traditions are part of Folk Hinduism, which has coexisted with orthodox Hinduism and is widely practised throughout the Himalayas. The harsh living in the Himalayas and continual exposure to the whims of nature created a strong belief in paranormal phenomena and a plethora of folk gods, who were revered and respected. Every hamlet had its own god, known as Bhumyal or Kshetrapal, who guarded its borders. Every family has a Kul Devta or Kul Devi. There were also a plethora of other benevolent demigods and goddesses who could reward individuals, as well as evil spirits that could punish humans.
These activities are akin to shamanic traditions seen in ancient rituals all around the world. While most of these deities have been lost or absorbed into monotheistic practises, Hinduism maintains strong kuladevata traditions that have allowed the Jagar tradition to flourish in India and Nepal. The isolation of the Kumaon and Garhwal due to the Himalayas, in particular, facilitated the emergence of indigenous religious traditions, which are still prevalent in these regions alongside mainstream Hinduism.
Jagar rites are classified into three categories. The first is the Dev Jagar, or deity invocation, which frequently includes local gods occupying the medium’s body. The Bhut Jagar, or summoning of a deceased person’s spirit or soul in the medium’s body, is the second. Masan Puja is another less commonly done variant. Jagar is now seen as a cultural and musical component of local history that must be preserved. The practise is still highly appreciated, particularly in rural regions and in New Delhi. Because many Kumauni and Gadwali live in Delhi and are unable to travel to villages for Jaguar every year, they have started Jagar in Delhi.

The Jagar in Uttarakhand is organised for one day (Dishunsi), Three Days (Dhinali), Eleven Days and Twenty two Days (Baisi). There are Mainly Three Participants in Jagar.
Jagariya
The Jagariya is the singer of the ballads of gods who guides and calls upon the gods for rites. The Jagariya is supported by two or more men who sing in chorus with him.
Dagariya
The dagariya is the medium, the body of which the gods in the incarnation employ. Dagariya is a word derived from the Kumaoni word Dagar, meaning route. It is the Dagariya that shows the route to the gods.
Syonkar
Shankar is the individual who organised Jagar in search of divine help in his troubles. The Jagar takes place in the household of Synokar.

The chamber to be performed in Jagar is purified by the Jagar singer or Jagariyah’s carefully conducted techniques. For Homa is lit the Dhuni, or holy fire. Hurkan, Damaru or Doonr, Dhol, Damau, and Thali, which are all Uttarakhand-born instruments played by professional musicians, are the musical instruments used. Rituals are followed in Seven Steps and all the steps followed are very intense and need 100 % devotion.
Sanjhwali Geet

All the gods are recalled in Sanjhvali Geet, their names are being chanted and they are implored to help complete the Jagar.
Birtwai

In Birtwai, the heavenly spirit is adored and his travels and life-related ballads are sung out loudly.
Ausan

During Ausan, the Hurka and other instruments are gradually increasing in loudness. Here the Dagariya is in a moving, frenetic state of trance.
Guru Aarti

The followers of Guru Gorakhnath, who is remembered and called for protection, are believed to be of all gods and semigods in the indigenous pantheon of Kumaon. Guru Aarti, the ritual is called.
Khakh Raman

On the forefront of those who are present is the ash known as the Homa Bibhuti, the fire sacrifice for the gods. Khakh Raman (modern) is called Khakh Raman.
Danik Vichar

Think of the provider is Danik Vichar. People therefore Danik Vichar consider God and the manner in which he supplies them.
Ashirvad

Priests who pray for their success are ritually blessed. It’s called Ashirvad.
Prasthan

In Prasthan, at the Jagar stage the gods are thought to return to their celestial abode.

The great belief that the people of Uttarakhand have in God’s judgement and in the Law of karma behind the performance of Jagar says that evil deeds are being visited by the doer and justice is being delivered ultimately by the Gods. In addition to their religious significance, Jagar songs and singing styles are part and parcel of Uttarakhand’s cultural history. The ballads from many gods recited during the Jagar are part of Kumaoni and Garhwali’s huge folk literature. At the moment these ballads are collected for maintenance.
Jagar is an extremely devoted ceremony and one who is part of it has to be involved in every beat of its Rhythm.