Uttarakhand's cuisine is basic yet delicious, much like its people. Kumaon and Garhwal, two separate regions, offer palates of flavourful foods that are also abundant in nutrition. The state's cuisine is carefully selected to not only thrill the taste buds but also to make the most of the resources available.

Whereas considerable effort is taken to incorporate all of the necessary elements to keep one well-prepared for the harsh environment and trails, extra care is also given to retain the appearance and taste of the dishes. The secret to classic Uttarakhand food, which is mainly cooked over a slow fire and consists of lentils, is a well-balanced flavour.

Although Kumaon and Garhwal are divided into various regions, they are united in their cooking styles and ingredient selection. There are also numerous foods that are widespread in both regions but have different names. The culinary habits in the state also change with the seasons; for example, in the winter, Mathir with Til Laddus or Madua Rotis are favoured, and in the summer, Dubkas and Chholia Rotis are favoured.

The main components responsible for the taste and exquisite aroma of Uttarakhand meals are a variety of lentils that are unique to the state and a variety of flours made from barley and buckwheat. Garhwal foods are profoundly connected to its people; the meal is made with just the proper quantity of spices, enticing one to savour it. Garhwali cuisine includes Phanu, Kafuli, Thechwani, Chainsoo, Jholi, Gahat ke Paranthe, Roat, and Baadi. Meanwhile, in Kumaon, the delectable offerings include Aaloo Gutuk, Dubke, Thathwani, Kaapa, Chudkani, Jaula, and Sisunaak Saag.

Side dishes in Uttarakhand are essential and are cooked with great care. Bhangeera ki Chutney, Mooli Thechuwa, and Hara Namak are just a few of the foods that complement the main course meals. 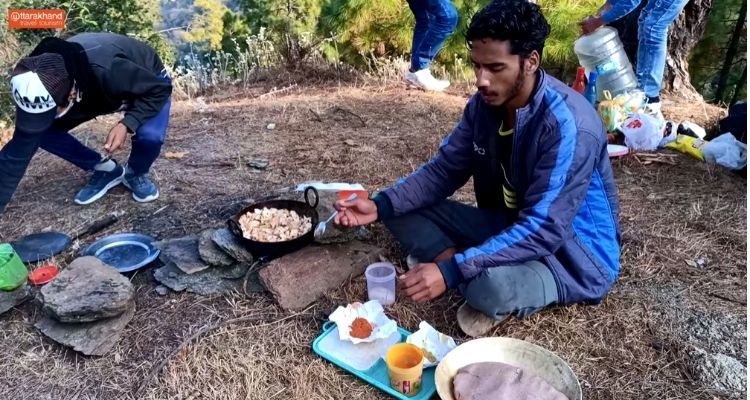 Today in this blog we will unwrap the recipe of two most famous dishes of Uttarakhand "Madue ki Roti and Pinalu ki Sabji". 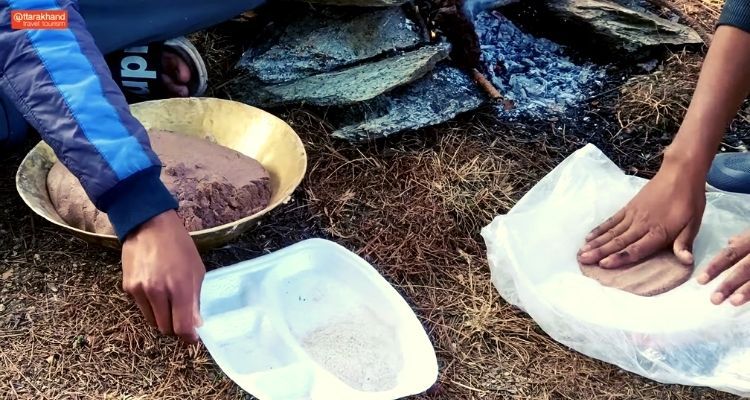 The pleasure of eating ragi with butter is different in the winter. Madua roti is not only better in taste, but it is also healthier for your health. (In English, Madua) Consuming ragi (madua) in the winter provides warmth to the body due to its warmth. Ragi (Madua ki roti) can be eaten with ghee, butter, jaggery, pickle, and hot greens. Madua is a grain that is mostly grown in India and South Africa. 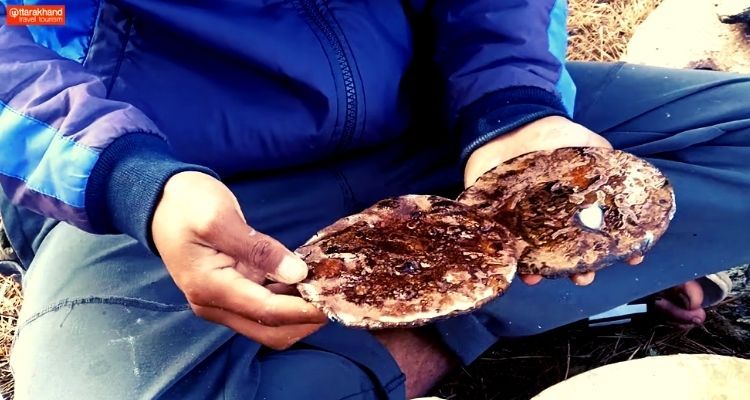 It has one of the highest yields in the Indian state of Karnataka. It is also known by a variety of other state-specific names throughout our country. Ragi in South India, Maduva in North India and Uttarakhand, Kodara in Himachal, and Nachni in Maharashtra are some of its leaders. Today's article (Madua ki roti) will go over all of the benefits of eating Maduwa bread. 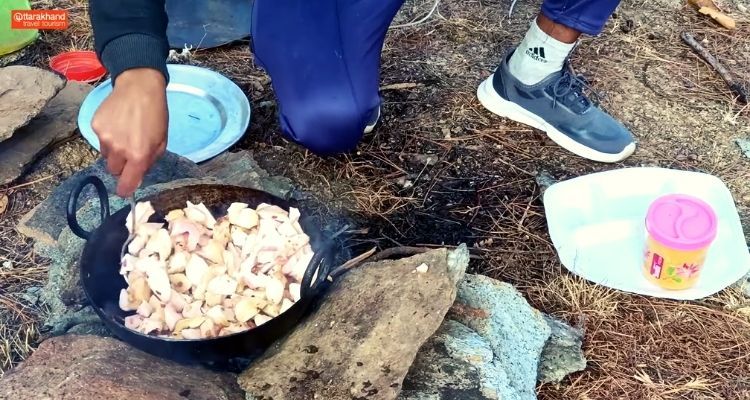 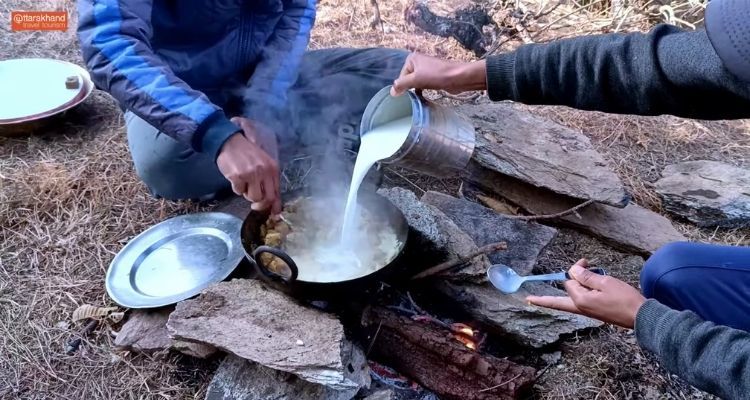 Pinalu is ready to eat right after the rainy season and is widely accessible until the beginning of spring. All of the Arabic plant's roots, stems, and leaves are used to make vegetables here. Pinalu's vegetable as its root is popular in Uttarakhand; its stem is cut and dried and served as a vegetable; its stem is known as Naul. Not only that, but its leaves are known as gaba or gab, and its vegetables are also produced. 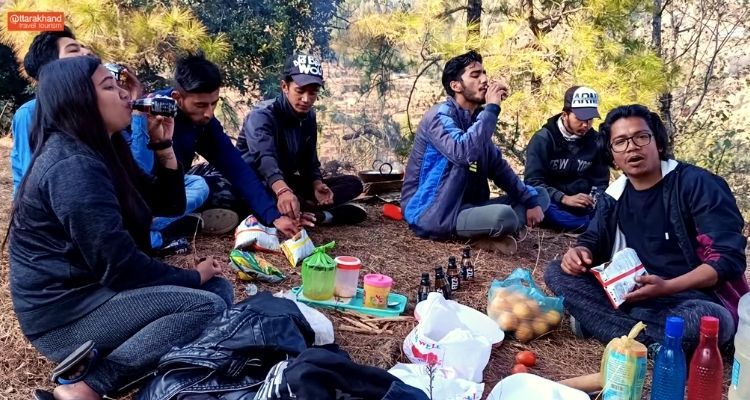 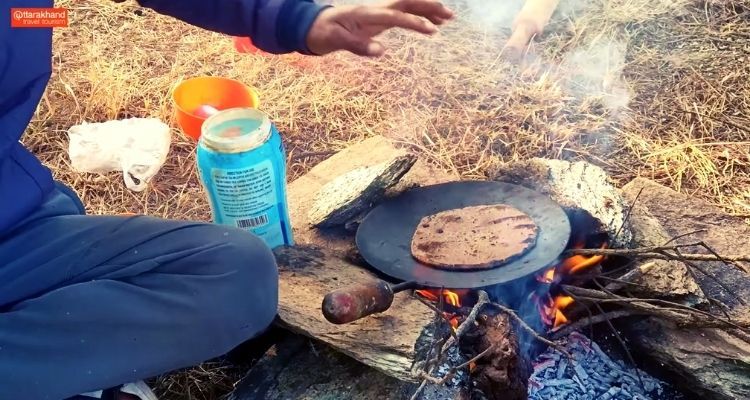 So Both the Recipe was made in Jugle with natural oven cooked in woods. The dishes comes out to be smokey flavoured and tastes the best!

Madua ki Roti:  To make this healthy and nutritious Mandua ki roti, combine mandua flour and wheat flour and make a stiff dough with water. Divide into equal-sized balls and roll into chapattis. Cook the chapatti on both sides on a hot griddle or tava. Make sure the chapatis are cooked thoroughly. Serve with milk and a generous amount of white butter, ghee (clarified butter), or artisanal cheese. Try this dish that is different from your typical roti or chapati and produces a healthful and balanced meal. 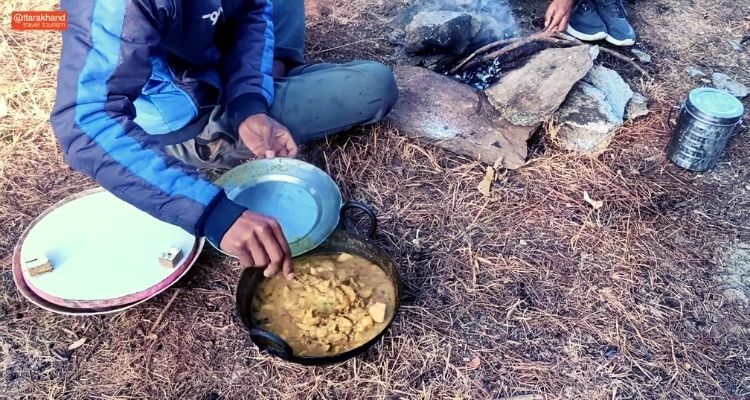 Pinalu ki Sabji:  Take Gaderi and thoroughly wash it. Peel and cut it into medium-sized pieces now. Warm the mustard oil in a dish to room temperature. Include crisp, ajwain, turmeric powder, dark pepper powder, and sear it right now. Include water and gaderi cut into small pieces. To make it semi-strong, bubble it in a weight cooker. Bhanga Seed should be crushed and strained. Pour in water to separate the juice/drain. Include/drain Bhanga Seed Juice into semi-bubbled gaderi. Cook it again with 2-3 bubbles. Finally, sauté it in ghee with jamboo and garlic tadka. The Pahari Gaderi Ki Sabji Is Finished. 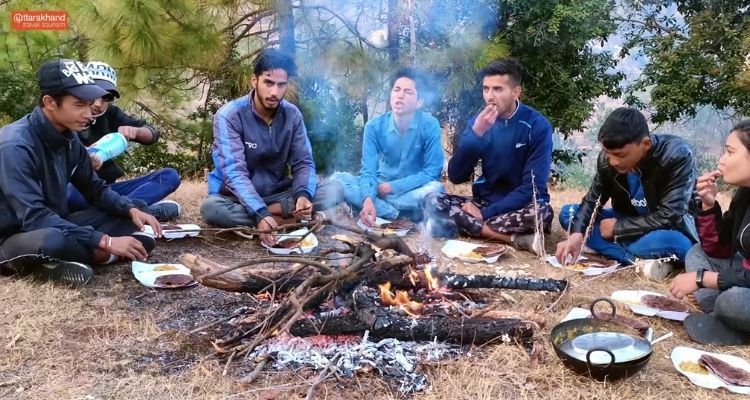 So friends you can enjoy them separately or together, choice is yours. Let us know in the comments that you know any unique Pahadi recipes?