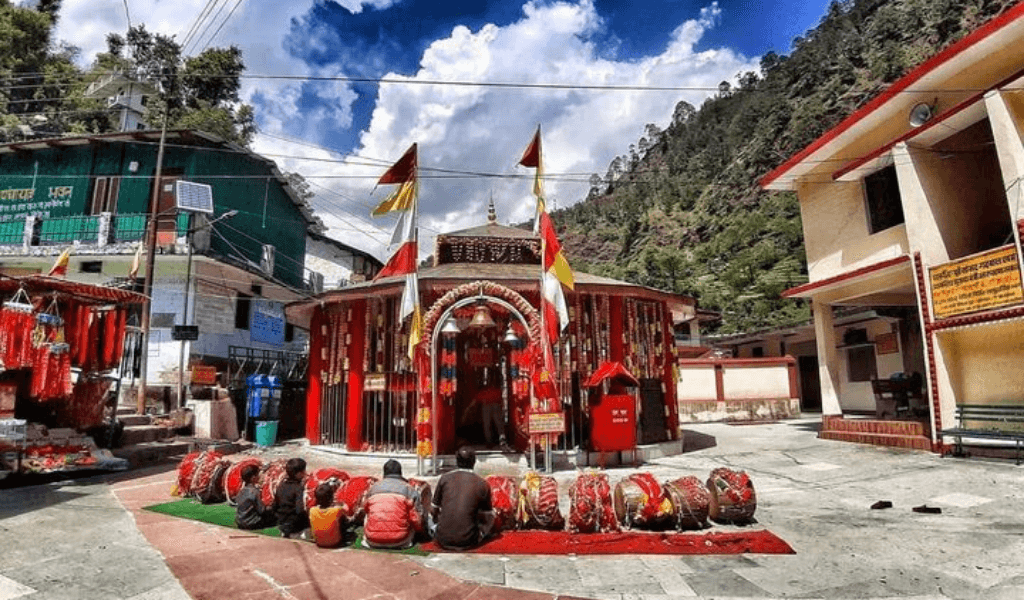 Kalimat is a small village in Hawalbag, about 5 kilometers from Almora, surrounded by dense pine and oak forest. This location is ideal for a picnic with stunning views.

Kalimat is a small village in Hawalbag, about 5 kilometers from Almora, surrounded by dense pine and oak forest. This location is ideal for a picnic with stunning views.

Temple of Shri Mahakali Mata The well-known Kalimath Temple is located on the banks of the Saraswati River in the Himalayas, surrounded by the Kedarnath peaks in the Rudraprayag district of Uttarakhand.

This temple is located at an elevation of 1463 meters above sea level and is one of the most popular tourist destinations in the Rudraprayag district. It is also one of India’s major Siddha Shakti Peethas. The 62nd chapter of Kedarnath’s Skanda Purana describes this Maa Kali temple.

A divine rock known as Kali Shila is located 8 kilometers from Kalimath temple and contains Mahakali Mata’s footprints. It is said that Maa Durga created Shumbh-Nishumbha and Raktabeej on Kalishila. Kalisila took on the form of a 12-year-old girl to slay the demon. Mother Durga received her power from the 64 yantras of the deity in Kalishila.

This location is said to be home to 64 Yoganiyas. It is said that the deities who were troubled by the Shumbh-Nishumbha demons did penance to Mother Bhagwati at this location. When Mother heard about the Asuras’ terror, her body turned black with rage, and she assumed a formidable form and killed both demons.

The most unusual aspect of the Maa Kalimath temple is that there is no idol in the temple; instead, devotees worship the Kundi within the temple, which is covered with the Rajatpat Shree Yantra. The divine goddess is taken out and the puja is performed only at midnight, when only the chief priest is present, on the Ashta Navami day in the Sharde Navratras throughout the year.

The Kalimath Temple is one of the most powerful Shakti temples. This is the only location where Goddess Mata Kali, along with her sisters Mata Lakshmi and Maa Saraswati, can be found.

In Kalimath, there are three grand temples dedicated to Mahakali, Shri Mahalakshmi, and Shri Mahasaraswati. The temples are built in accordance with the Vaikriti Rahasya of Durga Saptashati, which states that Mahalakshmi should be worshipped in the center, Mahakali in the south, and Mahasaraswati in the left. It is also said by the locals that Mother Sati took her second birth in the form of Parvati on this rock.

Raktabeej was killed by his mother near the Kalimath temple at the same time. Because his blood did not fall to the ground, Mahakali opened his mouth and began licking it. Raktabeej Shila is still located on the river’s banks. His head had been placed on this rock by his mother. Even today, Raktabeej Sheela can be found on the riverbank near the temple.

Every year on the day of Dussehra, blood ie blood comes out of Kalisheela, which is located on the bank of the river of the temple and on which Maa Kali killed the demon Raktabeej in Kalimath.

It is also believed that Maa Kali did not calm down even after killing Shimbh, Nishumbha, and Raktabeej, so Lord Shiva laid down under Maa Kali’s feet, and as soon as Maa Kali put her foot in Lord Shiva’s chest, Maa Kali’s anger was pacified, and she meditated in this pool. It is also believed that Maa Kali is contained in this pool, and Shiva Shakti is also established in Kalima

Every year during Navratri, devotees,

To get to Kalimath Temple, first travel 42 kilometres from Rudraprayag along the Gaurikund Highway to Guptkashi.
The Kalimath temple is then eight kilometres away by road from Guptkashi.

and devotees from all over the world flock to Kalimath temple to seek Maa Kali’s blessings. Devotees in this Siddhapeeth worship the mother by offering raw coconut to her and items related to the goddess’s makeup, such as bangles, bindis, small mirrors, combs, ribbons, and chunaria. The Kalimath temple is the only place in the country where separate temples of Maa Kali, Maa Saraswati, and Maa Lakshmi can be found.

If you come to visit Devbhoomi in Rudraprayag district of Uttarakhand, then you must visit the divine Kalimath temple as well as other famous Kedarnath temples, You can fulfill your wishes by visiting Tungnath Temple, Koteshwar Mahadev Temple, Hariyali Devi Temple, and Triyuginarayan Temple.