Bhowali is a gateway to the Kumaon region 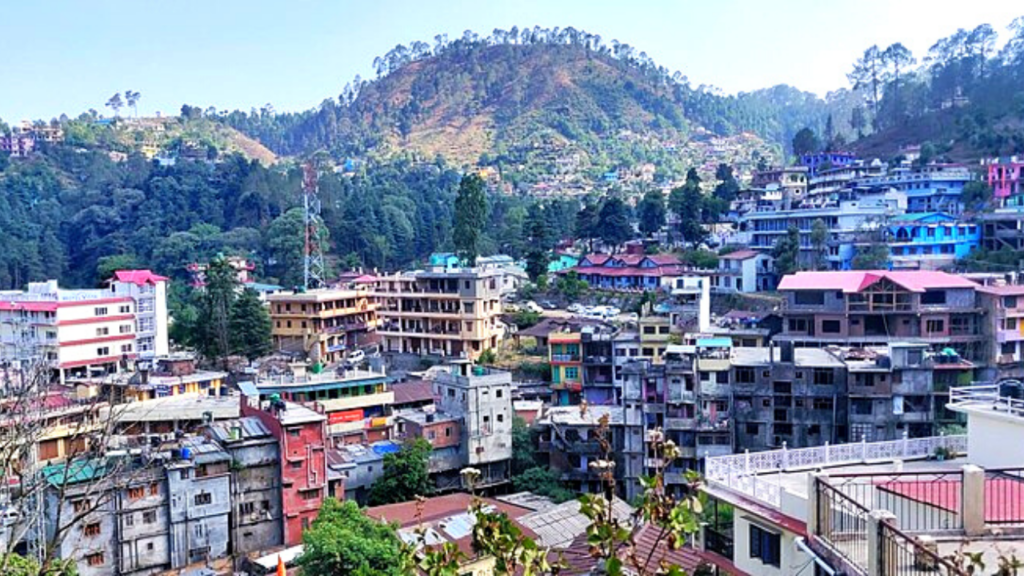 Bhowali- The Gateway of Kumaon

Bhowali is a gateway to the Kumaon that is located in the heart of the Nainital known for the finest quality fruits like apples, peaches, and several lakes.

Bhowali is a lovely hill station nestled in the lap of another popular and scenically blessed hill station, Nainital, which is only 11 kilometres away. Bhowali, located at an elevation of 1706 meters above sea level, offers some of the best views of the snow-capped mountains and lush green forests.

Though it is a small town, Bhowali is well-known for being an international exporter of delectable fruits such as apples, plums, peaches, strawberries, and apricots. And, indeed, including this one-of-a-kind Hill Fruit Mart on a tourist’s sightseeing tour of the town is a must.

Bhowali is the gateway of Kumaon is an incredible location, almost on the Nainital border, surrounded by several lakes, orchards, farms, and tea estates, and is what makes it one of the best tourist destinations in the Kumaon region. From here, explorers can easily reach other districts such as Almora and Bageshwar.

The Golu Devta Temple, also known as the ‘temple of the Bells’ due to the thousands of bells hanging throughout the temple, is an enticing place to visit while on vacation in Bhowali. Another tourist attraction that distinguishes it from other towns and villages in Uttarakhand is the lovely Shyamkhet tea garden, which is surrounded by scenic grandeur.

The Folk Cultural Museum may be of interest to culture enthusiasts. This place has captured tourists’ attention for planning a delightful tour, both with family and friends, due to its pristine beauty.

The weather in Bhowali is pleasant all year, with temperatures ranging from 7°C to 31°C. If you want to see the best of this hill station, come between February and April or September and October, which are considered the best months to visit Bhowali.

The summer season in Bhowali, which lasts from March to June, is mild, with temperatures ranging from 13°C to 31°C.
The cool breeze keeps the temperature down in this sunny weather, and the blooming fields of wildflowers appear appealing to tourists.

The gentle showers, which last from July to the middle of September, turn the landscape green and picturesque. With temperatures ranging from 22°C to 29°C, tourists can relax and rejuvenate in the midst of pristine nature. However, the risk of landslides is always present if there are heavy rains for several days in a row, which could derail the trip. It is best to check the weather forecast before planning a trip to Bhowali during the Monsoon season.

The winter season in Bhowali lasts from the middle of September to the end of February, with temperatures ranging from 7°C to 26°C. Winters in the area are spectacular, with snow-white scenery that captivates visitors. So, if you’re thinking about visiting Bhowali, this is the best time to do so.

Places to visit in Bhowali

Bhowali is the gateway of Kumaon and has a lot to offer its visitors, from the unique Golu Devta temple and the famous Kainchi Dham to the aromatic Shyamkhet Tea Gardens. Then, for those interested in regional art, there is the Folk Culture Museum, which educates visitors about local culture and its significance. Cheena Peak’s challenging treks, carved amidst nature’s splendour, are a paradise for active vacationers and thrill-seeking adventurers.

Chitai Temple is dedicated to Golu Devta, one of Kumaon’s most revered deities. The temple is located in Almora and is one of Lord Golu’s most popular temples. Other well-known Golu Devta temples can be found in Ghorakhal and Champawat. Every day, hundreds of believers submit their wishes on paper (sometimes on stamp paper) to Lord Golu’s temple. They are certain that the Lord of Fairness will grant all requests made with a clear conscience. When their wishes are granted, devotees show their joy and gratitude by tying bells around the temple grounds.

A renowned temple dedicated to Neeb Karori Maharaj is located 9 kilometres from Bhowali and makes for an enchanting visit for Bhowali tourists. Kainchi is a beautiful secluded mountain ashram in Uttarakhand’s Kumaon Hills. In June 1964, the first temple was dedicated. It is about 38 kilometres from Nainital. Hundreds of people visit the temples here every day during the season. Individuals staying at the ashram are required to participate in morning and evening arati, and rules are strictly enforced. Because of the extreme cold, the ashram is closed for the majority of the year.

This place is worth a visit, especially for tea lovers, to admire the general splendour of the lush tea gardens amidst the serenity of nature. Shyamkhet is only 1.5 kilometres away from Bhowali. The region is well-known for producing high-quality tea that is exported all over the world, including a variety of organic teas.

Ramgarh, a picturesque hill station in Uttarakhand’s Kumaon region, is surrounded by verdant apple, peach, pear, and apricot orchards. This lesser-known hill station near Mukteshwar has breathtaking views that provide a visual feast, making it a strong contender for being named one of India’s most beautiful places. Those looking for a break from the popular and crowded hill station can certainly plan a vacation here, as the mountains and land at Ramgarh are still unexplored and full of stories to tell. With that in mind, did you know that Ramgarh has been a warm host to Nobel Laureate, Rabindranath Tagore.

This privately owned museum, also known as the ‘Lok Sanskriti Sangrahalaya,’ was founded in 1983 by Dr Yashodhar Mathpal. Tourists who come here can explore the ancient artefacts and a diverse collection of photographs. The Folk Culture Museum charges admission.

When viewed from a distance, Naini Peak, Nainital’s highest peak, captures the attention of every tourist. With a height of 2615 m, the peak is frequently blanketed with snow-covered trees, giving it a picturesque appearance. The trek to Naina peak is well-known among trekkers due to its scenic trails and high altitudes. A 6 km hike to the summit of Naina Peak is well worth the effort, money, and time spent because tourists are rewarded with breathtaking views of neighbouring mountains and the city throughout the trail. A few kilometres of walking trails allow you to capture the landscape from a variety of perspectives, but it never looks less than breathtaking. The route is easy, passing through dense Deodar, Cypress, Pine Forest, and rhododendron-strewn paths. An elevated view of the stunning kidney-shaped Naini Lake can take one’s breath away.

Where to Stay in Bhowali

Bhowali is the gateway of Kumaon and offers accommodations ranging from luxurious to budget-friendly. Bhowali is an appealing part of Uttarakhand’s best tourist destination, Nainital, and is home to several luxury hotels and guest houses. Aside from that, there are numerous budget hotels, lodges, and cottages for backpackers.
And, as tourism grows, many good hotels and resorts on the outskirts are springing up to comfortably house the tourists. In addition, homestays are becoming available in Bhowali, allowing visitors to enjoy an authentic stay in this beautiful Kumaon region destination.

How to Reach Bhowali

Bhowali is the gateway of Kumaon’s peaceful hill station located on the Haldwani-Almora-Ranikhet road, approximately 11 kilometres from Nainital.
As a result, tourists can arrive here via any mode of transportation, such as trains, buses, or flights.
Local public transportation is quite frequent and easily accessible here.

Pantnagar, about 63 kilometres away, is the nearest airport to Bhowali. There is a regular Air India flight from Delhi to Pantnagar. Once there, buses and private taxis are readily available to take you to your desired destination.

Kathgodam, about 29 kilometres from Bhowali, is the nearest railway station, with several train options connecting the city to major stations.
Once you arrive, auto-rickshaws, buses, and private taxis are always available to take you to your desired destination, Bhowali.

The nearest major bus stations are around 34 km and 36 km away from Bhowali, respectively, where several buses arrive from major cities. Cabs to Bhowali are readily available from major cities and towns in Uttarakhand, as well as Delhi and several other cities.